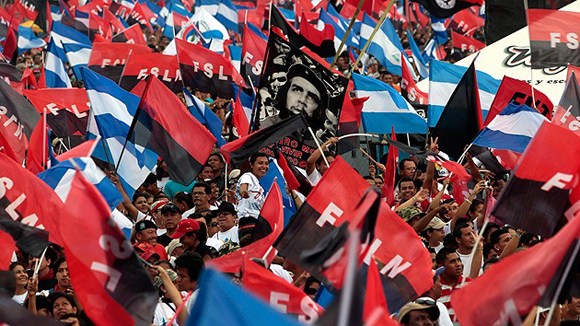 Last Friday, June 29, various organizations met in Madrid and decided to constitute a Platform of Solidarity with Nicaragua and the Sandinista Front. The purpose of this Platform is to confront the imperialist aggression that, as has happened in other Latin American countries, tries to overthrow a legitimate government by breaking the constitutional order through some form of coup d’état.

What is happening in Nicaragua at the moment is part of a regional offensive to roll back the progressive and/or revolutionary processes in the region. It is a new episode of imperialist war in Latin America.

During the eighties, the failure of neoliberal policies throughout Latin America led to a change of sign in the whole area. At the same time that the Latin American elites were defeated electorally, the United States lost influence in the domination and control of the resources and institutions of the whole area. Revolutionary, reformist and anti-imperialist projects were set in motion at the service of the people, and the United States saw what it has always considered its “backyard” endangered.

The attempt to recover the region by placing it back at the service of its imperialist interests is what gave rise to the military coup against Honduran President Manuel Zelaya, which has favored the “parliamentary coups” against Dilma Rousseff in Brazil or Fernando Lugo in Paraguay, the judicialization of politics by imprisoning Lula da Silva, In each Latin American country, the United States and its European allies have developed what their counterintelligence manuals call “low-intensity wars,” destabilization projects, soft blows, counter-insurgency, and so on.

In Nicaragua, the violent mobilizations, the actions of paramilitary armed groups and the rejection of dialogue follow the same pattern as the “guarimbas” in Venezuela, which were created and financed with the aim of breaking institutional legality and overthrowing the Bolivarian government. The aggression against Nicaragua is therefore part of a far-reaching regional offensive aimed at restoring docile conservative governments that impose a neoliberal agenda and restore the logic of capitalist accumulation without any obstacle.

From Solidarity and Internationalism we consider that what is happening in Nicaragua has to be analysed in the following way:

These groups burned city halls, schools, buses, hospitals, headquarters of the Sandinista Front, and even people. The images of these violent groups fill the social networks, but the big media have hidden them, intentionally accusing the Sandinista government of the murders and destruction committed by street violence. An important effect of this violence fed from the internal and external oligarchies is the irreparable damage to the Nicaraguan economy. From solidarity and internationalism we put in context and in history the events that are currently shaking Nicaragua and we denounce:

WE SUPPORT that the solution to the social and political crisis created in Nicaragua is PEACE, and in this sense we consider the best way to achieve it to be the PEACE AND DIALOGUE COMMISSION proposed by the government, and in which businessmen and unions, political opposition, students, and the Church participate. This commission has been created with the objective of achieving peace and normality through national dialogue between the main political, social, economic and religious forces of the country.

For all these reasons, and in coherence with our anti-imperialist, revolutionary and internationalist principles, we constituted ourselves in Madrid as a PLATFORM IN SOLIDARITY WITH NICARAGUA AND THE SANDINIST FRONT.

Our task will be to articulate an Action Plan that includes activities to denounce imperialist interference in Nicaragua and to support the legitimate government of the Sandinista Front in defense of its Sovereignty and Independence. We will also try to counter the media campaign that criminalizes progressive governments in the region in order to isolate them and allow an armed intervention, a coup d’état or the overthrow of legitimate governments.