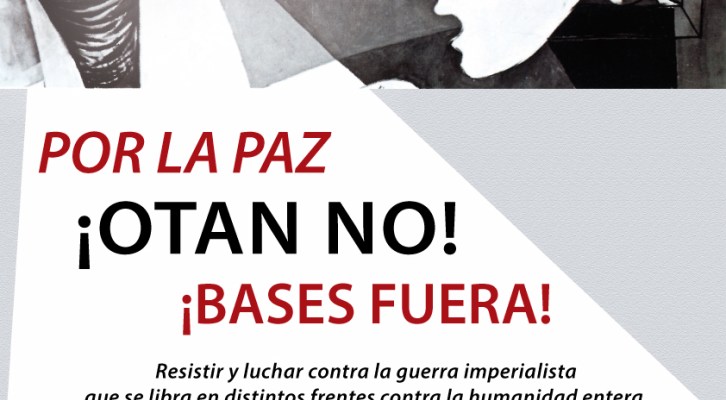 Campaign Against the Summit: For Peace, No to NATO, bases out!

On the occasion of the NATO Summit to be held in Brussels on July 12, 2018, various organizations are promoting an international campaign against NATO’s growing imperialist offensive. The Internationalist Anti-imperialist Front adheres to this campaign with the public statement below.

We encourage all readers to participate in this campaign (and the related ACT to be held on June 26 in Madrid) via social networks, using the tag #PorlaPazOTANno, from 17 hours on July 11, with the following messages:

For Peace. No to NATO, Bases Out!

On the occasion of the NATO Summit to be held in Brussels on 12 July 2018, various organisations are promoting an international campaign against NATO’s growing imperialist offensive. The Internationalist Anti-imperialist Front adheres to this campaign with the following public statement:

The systemic crisis of capitalism requires war in order to find the solution to its problems. NATO, the main instrument of war in the Euro-Atlantic capitalist space, needs the identification of a clear enemy that justifies its action on many fronts. The emergence of China and Russia as main competitors on the world stage has motivated a strategic reorientation of NATO that is expressed in several senses.

NATO is pressuring its members to spend 2% of their GDP on the military budget by 2024. As a result, Spain’s defence budget has grown by more than 10% by 2018 (only partly due to the outcrop of military investments hidden in other budget lines) and is expected to double by 2024, while there is a strict policy of cuts in social spending imposed by the EU.

NATO has urged its members not to sign the UN Treaty on the Prohibition of Nuclear Weapons. The US has launched a $1 trillion programme for the “modernisation” of nuclear weapons. NATO remains an armed nuclear alliance, with US bombs deployed by Europe being modernised to B61-12 as tactical offensive weapons, projectable from Russia’s own borders, eluding control of the various disarmament treaties. The development of the “anti-missile shield” also continues in order to neutralize the possible response of Russian strategic weapons to a first NATO attack.

NATO’s eastward expansion violates the commitment made after the dissolution of the Warsaw Pact. Montenegro joins NATO in 2017, despite overwhelming popular opposition within the country. Russia’s recovery of the Crimea, following the fascist coup d’état promoted by the US and the EU in Ukraine, has served as a pretext to tighten the siege on Russia with the massive deployment of troops in Poland and the Baltic States during 2017 and an intense programme of military exercises in which Sweden and Finland, traditionally neutral countries, have participated. Colombia has been included as a new “global partner” of NATO, which means a threat against Venezuela and the emancipatory movements in Latin America.

The Permanent Structured Cooperation (PESCO) programme is the latest evidence of the rapid and dangerous militarisation of the EU as a pillar of NATO. Investments of 20% of military expenditure will be obligatory for EU members who, as in the case of Spain, have committed to it. The military industry, one of the few sectors that have not suffered relocation, has become one of the main economic motors of the EU, benefiting from a specific investment programme. The EU is promoting a European Schenghen area and an investment programme in transport infrastructure that will allow troops to move towards the eastern front. Other signs of the militarisation of society, with Operation Gladio as a precedent, are the growing presence of troops on the streets, the increasingly riot-oriented military training or the “strategic information” offices of NATO and the European Parliament as emitters of war propaganda.

NATO’s intervention in Afghanistan led to the creation and growth of terrorist organisations and their associated combat forces that continue to this day. The so-called “war on terror” violates international law and justifies military interventions by disguising them as “humanitarian”. It is the new modus operandi of imperialism, in which the military occupation of the states is replaced by the creation of chaos through mercenary armies, balkanization and the destruction of any state structure capable of resisting plunder. NATO’s “war on terror” is responsible for the destruction of Libya and has provoked the exodus of millions of people trying to reach European territory by crossing the Mediterranean in precarious means while facing the military brutality of NATO and the EU. Special forces and secret services intervene with impunity through interposed actors and by concealing their criminal practices and their links with the same terrorist groups that end up operating on European territory, while the military industry multiplies its profits with state and non-state clients beyond all control.

NATO’s so-called commitment to peace and stability is false. Nuclear weapons, military spending and interventionism can never serve peace. Their so-called “war on terror” is responsible for the destruction of countries and the death or exile of hundreds of thousands of victims. We need real peace, with social justice, environmental protection, equal access to resources and shelter for those fleeing exploitation and violence caused by the voracity of imperialist expansion.

The Iberian Peninsula plays a crucial role on the geostrategic chessboard, as a crossroads of the Europe/Africa and Mediterranean/Atlantic axes. This explains the presence of US bases since 1953, from which all military interventions in the East and Africa have been supported. The subsequent entry of Spain into NATO, against the majority opinion of the Spanish people, placed the armed forces at the service of imperialism, for the “defence” of the West. Since then, NATO has set the political orientation and military action plans, always under the hegemony of the United States. The absolute cession of sovereignty in military matters contrasts with what is proclaimed in the only democratic and sovereign Constitution, that of the Second Republic: “Spain renounces war as an instrument of national policy”. Out of democratic decency, out of respect for our sovereignty and that of other peoples and nations, we say NO to war and demand the exit of NATO and the immediate closure of the US bases in our territory.

We refuse to accept new increases in defense spending at the expense of social spending.

We reject the expansion of NATO as a destabilizing and aggressive strategy, already reaching Latin America.

We oppose the increasing militarization of Europe, everything called the European Defence Policy, and NATO introducing us into a new Cold War.

We demand an end to the war and to NATO’s military interventionism, to the militarisation of the Mediterranean and to all military action against those who seek refuge.

Finally, out of respect for future generations, we demand the dissolution of NATO.