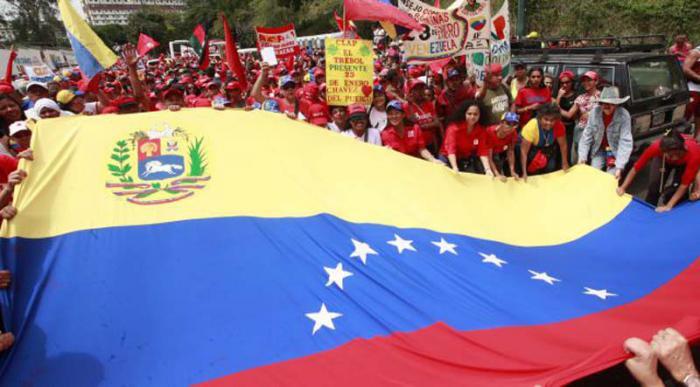 The Internationalist Anti-imperialist Front ( FAI ), in defence of Venezuela and against the imperialist war

The FAI condemns the presence of U.S. Southern Command troops in Colombia, a country that is spearheading military aggression against the people and the legitimate Venezuelan government. The FAI also condemns the attitude of the “democratic” governments of the EU, and especially of Spain, which is and has been a state promoter of violence and aggression against Venezuela since Chavismo came to power in 1999.

During 2017 Venezuela suffered constant violence -guarimbas (street violence organised by the opposition) and media campaigns- from the so-called opposition forces, which were defeated both in the street and in subsequent elections (National Constituent Assembly, gubernatorial and municipal elections). The “opposition” today only has the military support of the aggressor powers, the USA and the EU, which need war – disguised as a “humanitarian war” – to put an end to the government and the life of a people who have often expressed their democratic will.

As FAI, we oppose this aggression and call on all those who defend peace and democracy to show solidarity with the Venezuelan people, their government and the peace process interrupted this week by the opposition, at the behest of the imperialist axis and its NATO.

How dare they speak of democracy, those who only support war and do not respect sovereignty or the popular vote. How dare the big corporations that support NATO and that have already destroyed many countries with the sole objective of looting and imposing the ruthless law of maximum profit for their banks and corporations speak of democracy. We do not forget the crimes against humanity against Iraq, Libya, Yugoslavia, Afghanistan, Syria, Yemen, Palestine, nor the millions of dead and displaced.

While military budgets are increasing in the USA and Europe, the peoples of these countries are suffering a terrible situation of cuts in social and political rights. Democracy itself is in danger, and the imperialist war will end up destroying also the peoples of Europe and the USA if they do not rise up against this barbarism.

In Latin America, the OAS and the so-called Lima Group – led by the USA – are the battering rams to prevent peace and destroy Latin American unity. The strategy is coercion, blockade and the use of “interposed armies”, in this case from Colombia, which has been at war for more than 30 years, has an irregular (paramilitary) army and seven US military bases, in addition to being a partner country of NATO. Peru has increased its military budget by 668 million dollars, Chile by 140 million dollars and Argentina by 2,000 million dollars.

NATO has increased its budgets to reach 2% of the GDP of all its members, which means that, for example, Spain will increase its military budget by 80% this year, while retirement pensions will increase by 0.25%. For its part, the U.S. plans to increase the defense budget by $74 billion in 2019; this will be one of the decisive factors for the U.S. deficit to increase by 125% in 12 months.

U.S. Secretary of State Rex Tillerson traveled to Colombia to agree on how Colombia would intervene in Venezuela. This visit was continued by Kurt Tidd, Head of the U.S. Southern Command, the organization that prepared the document Venezuela Freedom II that contains in detail the strategy and actions that the U.S. plans to develop to dominate Venezuela, seize its resources and eliminate any vestige of resistance to its interests.

At the same time and as part of the war strategy, the Inter-American Commission on Human Rights of the OAS issues a report accusing Venezuela of human rights violations. However, the OAS remained silent and supported coups d’état and dictatorships such as those of Guatemala, Argentina, Brazil, Chile, and the invasions of the Dominican Republic, Panama, and Grenada. The most recent case is the silence and complicity with the electoral fraud in Honduras.

All this shows that there is a change of phase in a war: the conflict in Venezuela is not an internal conflict, nor is the conflict with Colombia a bilateral problem, but a war front of imperialist expansion whose end is domination, plundering and the elimination of any form of resistance.

Chavista Venezuela has been resisting the permanent war for 16 years – economic, political, propaganda, military-terrorist, and diplomatic – and the imperialist aggressions have produced a lot of damage, but they have been defeated. At this moment they are preparing for direct military intervention and it is necessary for the whole world to rise up, condemn these crimes and mobilize all our strength of international solidarity to prevent barbarism.

Yesterday, the sabotage of a power station in Miranda, the sabotage that affected the Bank of Venezuela and subway lines, show who the terrorists are who call themselves Western Democrats.

For the dignity, for the sovereignty and unity of the peoples against imperialism and war!

Get the bloody hands of NATO out of Venezuela!