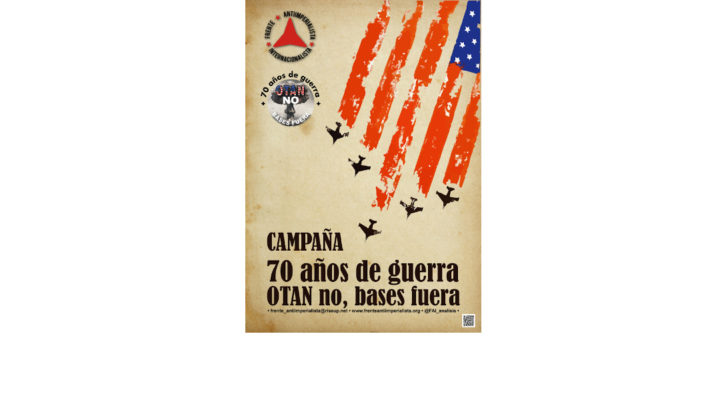 NATO AND THE AGREEMENT ON DEFENSE COOPERATION

NATO AND THE AGREEMENT ON DEFENSE COOPERATION

On the occasion of the launching of the campaign for the NATO Counter-Summit Madrid 2022, the Internationalist Anti-Imperialist Front makes public the attached report.

The purpose of this report is to draw attention on two issues that have profound consequences for both the world and our country in particular: NATO and the Agreement on Defense Cooperation between the United States and the Kingdom of Spain.

This is not a finished or definite document, but an open one which is meant to be developed from this very moment until the Counter-Summit by all contributions that may be made during the campaign that is now taking off.

The report outlines the historical trajectory of both issues. However, it does not focus so much on the events in themselves, but rather on their causes, motivations, and the logic they are framed in. It addresses the multidimensional character of the Atlantic Alliance, which transcends the military dimension. The analysis is centered on the objectives and the structure of this organization together with its plans of expansion contemplated in the 2030 Agenda.

Likewise, the report addresses the military relations of the Spanish State with NATO, examining the subordination and dependence of the former to the latter over the latest period of nearly 70 years.

Moreover, the report highlights the crucial role of popular mobilization as the main mechanism of defense against the barbarism we are currently facing.

The deadline for the renewal of the Defense Agreement between Spain and the USA has been scheduled for the coming mid-May, and the next NATO summit will be held in Madrid in June.

The aim in both cases is to push up our involvement in countering the war plans being prepared by the West under US leadership.

The grotesque farce of the “war to protect” will be fueled by all kinds of media manipulations involving political, institutional, cultural and social actors.

The report seeks to raise the consciousness needed to stop this inhuman spiral of brutality and violence, as well as to help dismantle these criminal alliances.