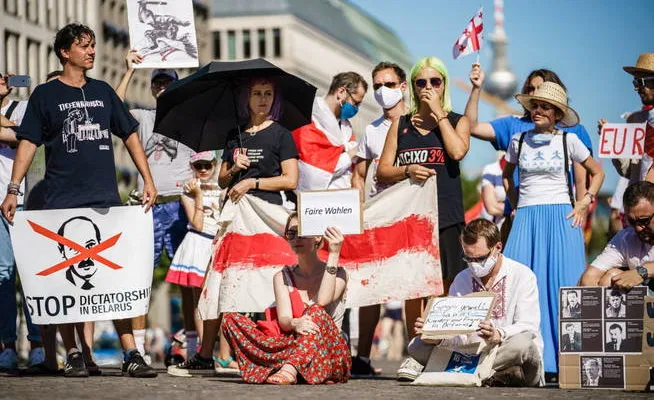 New edition of the “colour revolutions” in Belarus

The imperialist system of global capitalism is in a structural crisis that is steadily deepening since the financial crash of 2007. The system has reached the limits of its expansion, facing the scarcity of natural resources and the lack of new markets that could feed its insatiable need for capital accumulation. The only way to delay its collapse is to destroy all barriers to the integration into the system of countries that resist the neoliberal logic of infinite accumulation in a finite system.

Belarus has intense political, economic and military relations with Russia, maintained since their common Soviet past. And just like the Ukraine before the 2014 coup d’état, promoted by the governments of the European Union and the United States, Belarus occupies a very relevant geostrategic position in the region. With borders with Poland, Latvia and Lithuania, countries that concentrate the accumulation of troops and weapons with which NATO harasses Russia, and with Ukraine to the south, its fall into NATO’s hands would allow the threat lines of the political-military organization to be advanced over Russia. Moreover, Belarus means access by land to the Russian enclave of Kaliningrad in the Baltic.

There are undoubtedly powerful interests in the Western capitalist world to destabilise Belarus and subject it to Euro-American vassalage, as they have already done with their neighbouring countries.

The Belarusian region, from its origins in the 6th century was ascribed to Kievan Rus, the historical origin of Russia. Today’s Belarus has two official languages, Belarusian, spoken by 19% of the population, and Russian, used by 72%.

According to UN data, Belarus has a very efficient health system, and a very low infant mortality rate, substantially better than that of the United Kingdom. Its literacy rate is 99% and its Gini Index (an indicator of inequality) is one of the lowest in Europe, making it one of the most egalitarian countries in the world.

The country’s economy is controlled by the state and 51.2% of Belarusians work for fully state-owned companies; only 1.4% are employed by fully foreign companies. The unemployment rate is less than 1%. It has a strong agricultural and heavy machinery sector (agricultural and military), from which most of its exports come, which are directed to Russia, but also to Germany, Ukraine, Poland and Lithuania.

Belarus is a member of the Eurasian Economic Community and the Collective Security Treaty Organization, which brings together Russia and several former Soviet countries. This does not prevent it from also maintaining political and economic relations with the European Union and discrepancies in some areas with Russia, where part of its oligarchy is also pressing for the state industrial sector.

With its Keynesian development model, relying on the role of the state in regulating the markets and the economy, Belarus is a challenge to neoliberal logic: it resists lowering the defences that would flood its country with foreign capital and goods, which would cause deindustrialisation, poverty and loss of sovereignty and eliminate any possibility of independent development in the interest of the masses.

However, it would be naive to think that Belarus is an ideal country. It is a country that does not exist in a vacuum, but as part of the system of global capitalism, which in turn influences the internal dynamics. This is reflected in the crisis that is deteriorating the standard of living of workers, especially in the areas of health, education, retirement and unemployment. Although the imperialist powers cannot generate the protests themselves, they can appropriate them at the right time if a leadership vacuum appears.

The history of the so-called “colour revolutions” shows us a clear pattern, both in action and in consequences. The pattern includes taking advantage of legitimate popular discontent to bring about regime change that leads to profound economic, legislative and social transformation. This is done through prefabricated processes of catalysis, induced by protest movements created through the interference of aid organizations and NGOs deployed and financed by government agencies of NATO countries and by power groups of Global Capitalism, as can also be seen in Hong Kong, Bolivia or the Ukraine. The insertion of mercenaries acts at the height of destabilization. The artillery of the capitalist propaganda machine is a primary amplifying and legitimizing factor in these processes.

The consequence of the success of these “colourful revolutions” has always been the political subordination of the country under economic extortion and the removal of obstacles to plundering, creating misery, eliminating democratic rights and using repression to compensate for its lack of legitimacy. We can see painful examples in Georgia, Libya, Ukraine and Bolivia.

There is a social segment in Belarus that controls part of the economic system, is eager to expand its power and has no qualms about opening the country to foreign powers in order to do so. Like the Ukrainian Nazis of the Euromaidan, the Belarusian insurgents shamelessly carry the colours and flags of the Vlasov battalion, the traitor who, together with the Ukrainian Stepan Bandera, outdid the Nazis in indiscriminate Soviet killings during the Great Patriotic War.

What more does it take for us to realise that by fighting alongside the forces of globalisation we are fighting against our own interests, that we are weakening our own position, that we are committing political suicide? How many more examples do we need to realise that if we have not achieved leadership over the workers’ movement so far, to close our eyes is to allow our enemy to deceive us?

The interest of Belarusian workers is to preserve jobs, to preserve industry, land, the welfare state and to go beyond Lukashenko, building workers’ power. All this is what the opposition openly says it is going to dismantle and it is just what the forces supporting the opposition have been advocating for 40 years.

We, the Anti-Imperialist Internationalist Front, denounce the intervention, in particular by the USA, the institutions of the European Union and its member countries, in Belarus and demand an immediate end to foreign interference in the country’s internal affairs.

We condemn the processes of subjugation and loss of sovereignty which would sacrifice the interests of the Belarusian people to the benefits of the imperialist oligarchy.

We denounce in particular the action of the High Representative of the European Union for Foreign Affairs, Josep Borrell, and demand that he respect the internal affairs of Belarus. We take this opportunity to call on him to condemn unreservedly the flagrant violations of human rights taking place in the USA and to denounce the military repression with which his government is attempting to silence the intense social protest with which the American people are facing unpunished police brutality and the supreme massacres they are perpetrating in a sustained manner.

We call on the anti-imperialist and progressive forces to defend Belarusian sovereignty and to support the defense of the Belarusian people against neo-liberal attacks.

For a Belarus free of interference and extortion,

You will not pass!