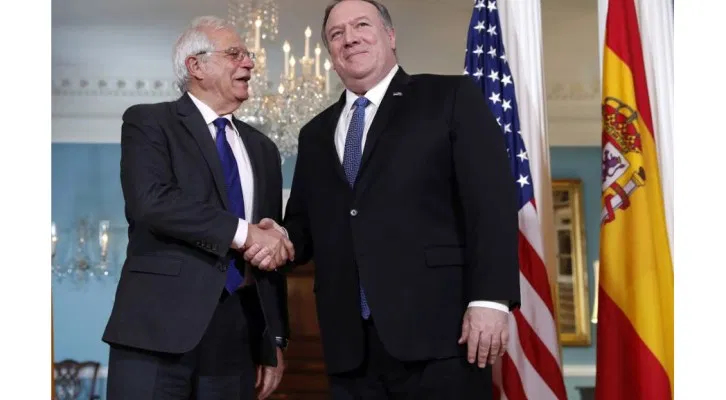 FAI denounces EU support for US interference plans against Venezuela

To the shame and humiliation of the supposed European “solidarity”, the High Representative of the European Union for Foreign Policy, the Spaniard from the PSOE Josep Borrell, issued a statement in which he expressly supported the latest proposal against Venezuela’s sovereignty that emerged from the propaganda laboratories of the US administration: they are prepared to lift the sanctions on condition that a process of “democratic transition” is opened in which neither the Constitutional President, Nicolás Maduro Moros, nor the self-proclaimed, lacking all democratic legitimacy, his faithful dog Juan Guaidó, already amortized, intervene.

This last occurrence of the US administration takes place in a context of various actions against the Bolivarian Republic of Venezuela and its right to manage its life and resources in a sovereign manner: the formal accusation before the US justice system of Maduro and other Venezuelan leaders as promoters of drug trafficking; the order to the Southern Command to deploy its fleet in the Caribbean, in a supposed campaign to control drug trafficking from Venezuela; and the dismantling of a new operation, coordinated from Colombia, to assassinate President Maduro.

All of this not only represents a threatening tone of a very worrying nature, but also clearly shows the mafia-like nature of the US political leaders, who are trying to be magnanimous and to lift the economic sanctions under blackmail and threat.

The fact that the US administration behaves in this way is something to which we are already accustomed and does not surprise us in the least; however, it is truly unbearable that the EU, as well as a High Representative of Spanish origin, should support such a nonsense, which calls into question all the harsh rhetoric on international law, human rights and democracy with which European citizens have been indoctrinated.

The economic war against Venezuela, launched by the US and supported by the EU, is making it very difficult for the government to fight the COVID 19 pandemic, which faces huge restrictions on obtaining the necessary inputs from the international market. Meanwhile, the pandemic seems to be raging in the heart of the so-called free world, which has been dismantling public health systems in favour of medicine for those who can afford it. The panic spreading among the US population represents a serious threat to its internal stability and to Trump’s re-election as President: nothing better than a new “war” for the already known process of gathering forces around the authorities and to stop thinking about the problems that really burden its population.

The Anti-Imperialist Internationalist Front raises its voice against the miserable conduct of the High Representative for Foreign Policy and many other political agents of the European Union and joins the revolutionary government of Venezuela in denouncing its support for the US interventionist plans against Venezuela. And it demands that the Spanish government not only disassociate itself from, but also condemn, any action of interference and especially any kind of civil or military intervention to subvert the constitutional order of Venezuela, whether it comes from the USA or the EU.