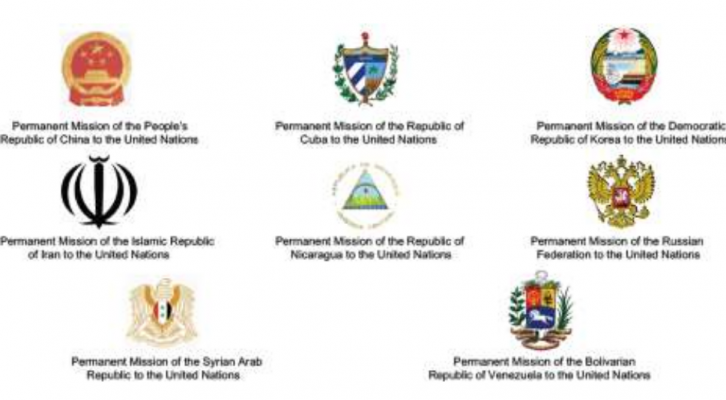 The representatives of the legitimate governments of China, North Korea, Cuba, Iran, Nicaragua, Russia, Syria and Venezuela to the United Nations have addressed a letter to their Secretary General, Antonio Guterrez, in which they demand the adoption of the necessary measures to put an end to the acts of economic warfare illegally waged against all of them by the US government and its European Union allies, with the following text:

(NOTE: This is translation of the Spanish version of the letter, not the original in English that was submitted)

On instructions from and on behalf of our respective Ministers for Foreign Affairs, and in response to their most recent appeals, we address Your Excellency on the occasion of a matter of the utmost importance and great urgency, namely, the global health crisis arising from COVID-19, recently declared a pandemic by the World Health Organization (WHO). Over the past few months we have all been following very closely the developments related to
COVID-19, including its rapid spread and the large number of human victims it has caused so far, as well as the impact it is having on the affected countries, particularly on the most vulnerable sectors of society. This is undoubtedly the greatest public health emergency of our time, which, while taking place at a time when multilateralism is under attack, offers a unique opportunity for multilateralism to succeed and be strengthened at this time of global crisis and uncertainty.

As you recently stated, “more than ever, we need solidarity, hope and political will to overcome this crisis together”, as truly united nations. But to do so effectively, we must join forces and act collectively, in a coordinated and decisive manner, as responsible members of the international community. It is our common responsibility not only to save succeeding generations from the scourge of war, as we pledged
not only to do so when we sign the founding Charter of the United Nations, but also to ensure the timely adoption of policies and strategies to save our own and the current generation, while giving them hope and guarantees for their well-being, stability and prosperity.

At home, all of our national governments have acted responsibly, including by taking the necessary precautionary measures to contain the spread of and combat COVID-19. We have also made progress in designing contingency plans to ensure, among other things, the functioning of basic services and emergency response systems at the current juncture. Similarly, as you know, we have been working with the
United Nations to strengthen our cooperation programmes, as well as with other partners to learn from their experiences and share best practices. Despite all this, we recognize that much remains to be done to succeed in this battle.

Your Excellency, today we have a common enemy: COVID-19. And, as you have recognized, it is time to “prepare, step up and step out. Our national governments have the political and moral will to move in that direction; our dedicated and professional physicians and health care providers are fully capable of serving in this time of need; and our people are ready to do their part, as we are all aware that this
historical moment demands the highest level of solidarity, cooperation and mutual collaboration. However, we have to recognize that this is a difficult, if not impossible, act for countries currently facing the application of unilateral coercive measures, which are illegal and in flagrant violation of international law and the Charter of the United Nations.

The destructive impact of such measures at the national level, plus their extraterritorial implications, together with the phenomena of overcompliance and the fear of “secondary sanctions”, hinder the ability of national Governments to, inter alia, have regular access to the international financial system or free trade; they therefore undermine the efforts being made by national Governments to attack the COVID-19, especially with regard to the acquisition
effective and timely delivery of medical equipment and supplies, including testing equipment and drugs, which are vital for the care and treatment of patients, as recently acknowledged by the Director-General of WHO. In addition, sanctions also have a direct negative impact on, inter alia, the human rights to life, health and food of the peoples subjected to them. Ultimately, these measures also affect the essential cooperation and solidarity that must
to prevail among nations.

Today, in the midst of the global pandemic resulting from COVID-19, that negative impact on the well-being of our peoples and countries is becoming even more severe and multiplying. Hence the urgent need for the international community, including the United Nations, to reaffirm its commitment to the concept of “We, the peoples of the United Nations”. Let us recall that, according to the conclusions of the United Nations independent experts, the enactment and implementation of unilateral coercive measures affect more than one third of humanity.

In the light of the above, we respectfully urge you to call for the complete and immediate lifting of such illegal, coercive and arbitrary economic pressure measures – in line with the long-standing and principled position of the United Nations to reject unilateral coercive measures – in order to ensure the full, effective and efficient response of all members of the international community to COVID-19, and also to reject the politicization of that pandemic. This
The joint appeal that we are making today, and from which we expect a positive response from you, is, as you know, supported by the provisions of a significant number of relevant United Nations General Assembly resolutions; it therefore provides a solid basis for any action on your part.

As you well know, we live in an interconnected world; therefore, in the context of a global pandemic, “hampering medical efforts in one country increases the risk to all of us”, so – as the United Nations High Commissioner for Human Rights has recently acknowledged – we must avoid the collapse of the medical and health system of any country as a result of the application of illegal sanctions.

Therefore, we cannot allow political calculations to stand in the way of saving human lives. This is a time, as you have stated – again and again – not for chaos, but for global solidarity, cooperation and prudence; for joining efforts at the national, regional and international levels, without any kind of discrimination, if we really want to overcome this complex human crisis and its economic repercussions; and also for recommitting ourselves to the Agenda for Sustainable Development of 2030 and our promise not to leave anyone behind.

Similarly, we will also underline the need, at the present juncture, to strengthen national economies in ways that provide national governments, as well as the public and private sectors, with the capacity to support and finance the plans and strategies needed to ensure that the spread of COVID-19 is contained. In this regard, we agree that, as you have recently stated, more than ever “Governments must cooperate to revitalize
economies, expand public investment, boost trade and ensure targeted support to those individuals and communities most affected by the disease or most vulnerable to negative economic impacts” and that urgent action is needed to “alleviate the debt burden of the most vulnerable countries (‘ ) and ensure adequate financial services to support countries in difficulty”.

This is of utmost importance, especially for countries that, in addition to having to deal with the COVID-19, also have to deal with other exceptional circumstances, such as the negative impact of unilateral coercive measures.

Furthermore, we take this opportunity to convey to Your Excellency our appreciation for the work currently being done by the United Nations system and for the very valuable support being provided to our nations, in particular the WHO, in responding to this global crisis, which we are confident we will overcome together and come out stronger.

Finally, we respectfully request your good offices to circulate the present letter as an official document of the General Assembly, under agenda items 83 and 126, entitled “The rule of law at the national and international levels” and “Global health and foreign policy”, respectively, and of the Security Council.

We are confident that you will give due attention to the serious concerns conveyed herein and take this opportunity to assure Your Excellency of our highest esteem and consideration.

The Anti-Imperialist Internationalist Front wishes to express its strongest support for the legitimate and just request of these sovereign nations before the international system of the United Nations, so that it no longer allows the imposition of unilateral coercive measures that contradict the principles of international law. And it takes advantage of this declaration to send to its legitimate representatives the testimonies of support of numerous people of the most diverse origins and occupations, who have adhered to the Call for the cessation of imperialist aggressions against Venezuela, against the blockades and for the sovereignty of the peoples that we recently launched from this same medium and to which we encourage you to contribute.