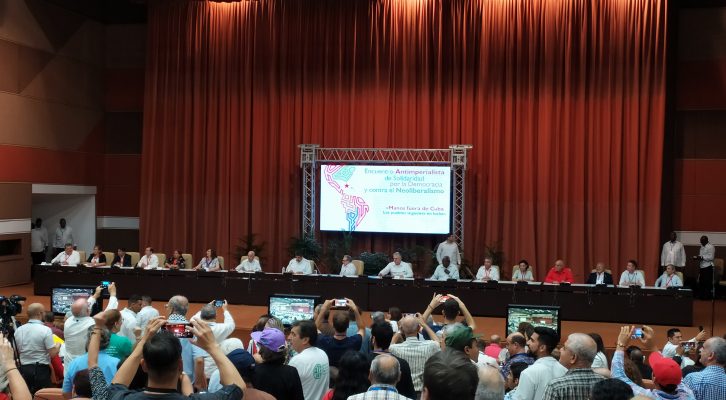 Report on the Anti-imperialist Encounter of Solidarity, for Democracy and against Neoliberalism in Havana

Brief report on the

Anti-imperialist Meeting of Solidarity, for Democracy and against Neoliberalism
Havana, 1-3 November 2019

prepared by the delegation of the Anti-imperialist Internationalist Front.

In recent years, Cuba had maintained a low profile vis-à-vis the United States in response to the appeasement policies carried out by President Obama, who had acknowledged the failure of the blockade of the island.

However, Trump’s accession to the presidency and the US’s ostensible decline in its attempts to keep the planet under its control have resulted in an intensification of the imperialist offensive against Latin America, which he considers to be the backyard from which he claims the right to its exclusive exploitation.

The political transformation in Latin America is patent and accelerated in recent times: on the one hand, we observe an unbridled aggressiveness on the part of the US against the countries that resist its dictates, which also receive the unconditional support of the EU; on the other hand, both in the electoral processes and in the streets of the whole continent, the failure of the neoliberal model is evident. The recent upsurge of the Helms Burton Law has meant a hard blow, in addition to the usual blockade measures against Cuba.

These circumstances have ignited all the alarms among the most conscious forces of anti-imperialism: the Movement of Non-Aligned Countries has received a vigorous impulse from the pro tempore presidency of Venezuela; additionally, Cuba decided to give world character to the Continental Day for Democracy and Against Neoliberalism, of which some meetings had already been held.

1332 delegates attended, representing 789 organizations from 86 countries, which implies the active participation of all possible instances in supporting Cuba: heads of state, members of governments, political parties, trade unions, social and confessional movements and intellectuals committed to the anti-imperialist struggle.

Cuba in solidarity, an example of internationalism and inspiration for all efforts to emancipate peoples, requires in these times of the solidarity of others in order to face the onslaught of the blockade.

But this solidarity must be framed in a unitary and coordinated effort with the struggles that are taking place in other spheres, but which are expressions of the same war against the peoples.

Attendance at the Encounter itself is a measure of the support that the Cuban Revolution receives among political actors from all over the planet. The declarations issued by the Cuban leaders express a sincere gratitude for this support; but they also express the Cuban determination to retake a leading role in the anti-imperialist struggle for which there is no leadership today that in other circumstances Fidel or Chávez himself represented.

Thus, in the diverse participation in the Encounter, from solidarity organizations without any political significance, through expressions of resistance and rejection of the imposition of the neoliberal paradigm, to the most genuine movements of anti-imperialist struggle, the broadest unity and commitment has been sought in the shared efforts based on what unites all of them, with the focus placed on solidarity with Cuba, but also on the resistances in Venezuela, Bolivia and Nicaragua, as well as with all the struggles of rejection of neoliberalism that extend to the continental level.

Special attention has been given to the participation of the youth in the struggles, the communicative strategies and the emphasis on the battle of ideas as essential elements of resistance, although the diverse character of the Encounter has hindered a deeper development in the analysis and strategy to confront imperialism.

The Encounter was endorsed by the Constitutional President of the Bolivarian Republic of Venezuela, Nicolás Maduro Moros, who participated in the closing session with a vibrant speech. The President of the Republic of Cuba, Miguel Díaz-Canel, also spoke and Raúl Castro was present.

An Action Plan has also been elaborated, which will be published as soon as it is published. 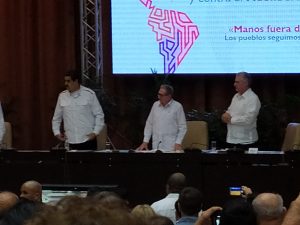 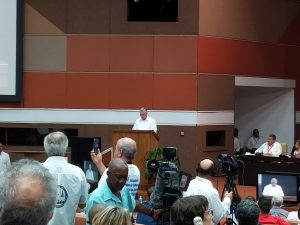 […] Report on the Anti-imperialist Encounter of Solidarity, for Democracy and against Neoliberalism in H… […]