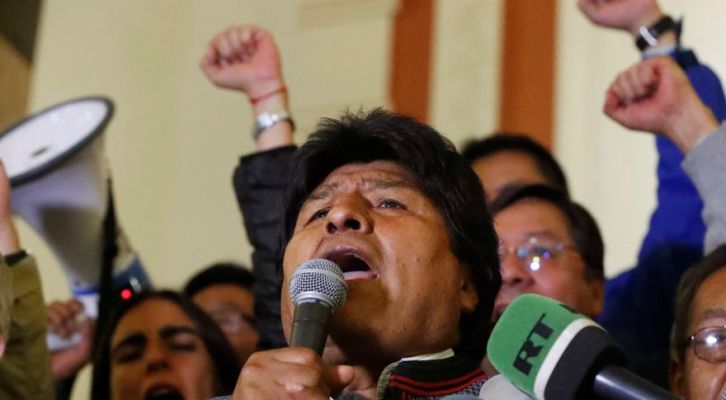 What kind of democracy are they trying to sell us, the democracies that are kneeling down to the empire and murdering their people – as in Chile and Ecuador – supported by the media that keep the barbarity quiet?

They do not deceive us. That criminal democracy is not the democracy that the Bolivian people have voted for.

Anti-imperialist democracy and sovereignty is what the Bolivian people have chosen and what must be respected.

Evo Morales has won the elections and the current coup d’état was prepared long ago, with millions of dollars invested in buying and mobilizing those who are creating this violence while being victims of their own ignorance.

The oligarchic right knew perfectly well that it would lose the elections – and just as they did in Venezuela with the guarimbas – it is following the script of the most brutal sectors fed by imperialism.

They are not fooling us. The people of Bolivia know perfectly well that their voice is the voice of all of Latin America in this long struggle for political and social liberation.

The elections won are the result of a long process of improvement in the living conditions of the majority, of the defense of the natural resources that the empire aspires to, of political sovereignty and Latin American unity.

From Madrid, all our solidarity and support to the people of Bolivia and its legitimate government.

Enough violence and respect for democratic and anti-imperialist processes!

Long live the people of Bolivia and its President Evo Morales!

Fascism -disguised today as democracy- will not pass!