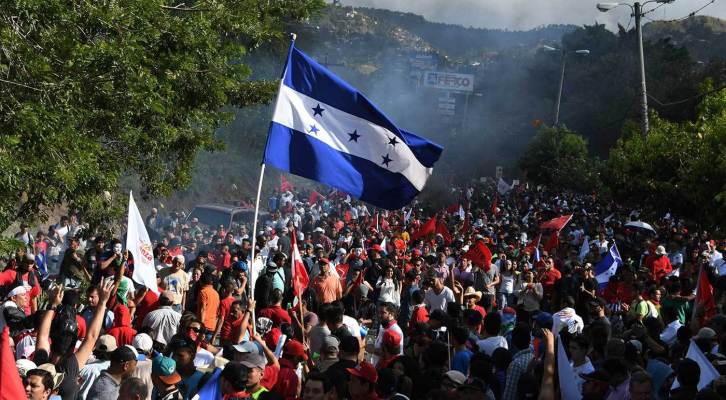 The Anti-Imperialist Internationalist Front has considered it necessary to elaborate and make public a reflection on the critical situation in which Honduras finds itself, which in the first place needs to be briefly described, since it is a reality silenced by the media and ignored by governments and institutions that nevertheless declare themselves concerned about “human rights violations” in other Latin American countries.

In recent months, Honduras has been the scene of massive citizen protests against two decrees passed by Congress at the end of April aimed, in practice, at the privatization of health and education. The reaction of the government of Juan Orlando Hernandez to these protests has been clearly repressive. However, the violence used against the demonstrators has not only not put an end to the mobilizations but has ended up leading a significant part of the members of the National Police to join the strikes and demonstrations. The Orlando government has not hesitated to resort to the Armed Forces to suppress the protests, and there have been at least two deaths. At this juncture there is also the deployment in Honduras of U.S. troops, specifically 300 troops of the Special Purpose Marine Infantry Air-Task Force of the Southern Command.

The information blackout to which this situation is subject is all the more shameful when we consider these recent events in their context. The socio-economic situation is considered catastrophic by international organizations (World Bank, UNICEF, UNDP, etc.), and there are reasons to consider that it is the poorest country in Latin America: poverty reaches 67.4% of the population, and 42% of households and 76% of the indigenous population are in a situation of extreme poverty. Thirty per cent of the population suffers from chronic malnutrition, 18 per cent do not have access to basic services and 32 per cent do not have access to sanitation. Only 29 per cent of children complete primary school and 13 per cent of children between the ages of 5 and 14 work. Finally, Honduras has the highest homicide rate in the world (56.52 homicides per 100,000 inhabitants).

In addition to these conditions, Honduras has been in a de facto state of constitutional emergency for ten years. On 28 June 2009, a military coup d’état took place against the legitimate Honduran President, Manuel Zelaya, who was beginning to give impetus to several far-reaching political and economic reforms and to add Honduras to the Bolivarian process. The coup ends Zelaya’s mandate and leads to the appointment of Roberto Micheletti as de facto president, who is not recognized by any government in the world. In 2010, in an election without guarantees, Porfirio Lobo is named president, who is recognized the next day by the U.S. and Canada.

Once again, after a series of manoeuvres of dubious legality that continued to prevent Zelaya from running as a candidate, Juan Orlando Hernandez, still President of Honduras, was declared the winner of the 2013 elections. Although on that occasion there were those who claimed that the elections had been manipulated, the real nonsense was his completely fraudulent re-election in 2017. Even the OAS General Secretariat pointed to a long series of serious irregularities and denied the slightest reliability of the result; the Secretary General of the Organization called for a repetition of the elections.

Honduras is a country devastated not only by poverty but also by violence perpetrated by an oligarchy that resorts with total impunity to the Police (which is partly militarized), the Army and even hired assassins, as evidenced by the murder of activist Berta Cáceres, which is only the case with the greatest international repercussion. In recent years, the Honduran government has dedicated 5.82% of its GDP to defense, which shows the absolute disregard for the terrible situation in which the vast majority of the country lives, and since the fraudulent re-election of Juan Orlando Hernandez the situation has continued to deteriorate in the last year, producing massive emigrations whose remittances represent 21% of the country’s GDP.

Honduras is currently considered a country where everything is possible, but nothing happens. Corruption in the army, police, administration and politics is structural, chronic and massive (there is 90% impunity for crimes). Geostrategic and economic dependence prevents any policy aimed at independence and national sovereignty. An important part of the country is controlled by maras and drug trafficking.

The superficial comparison of the Honduran and Venezuelan cases and the response provided by the self-styled “international community” in each case makes evident the double standards of our governments and international organizations. While interference in the case of Venezuela is permanent and justified by distorting and disfiguring the reality of the country, the “international community” does not react in any way to the tragic situation in which Hondurans find themselves, and if it takes any initiative, it does so in a way that perpetuates and aggravates it.

The Spanish State has not been oblivious to this process. Since 2014 it has maintained a cooperation project called “Democratic Governance and Rule of Law”, the purpose of which is to help create a Procedural Code that the opposition and indigenous people consider to be aimed at criminalizing social protests and legitimizing the current Honduran judicial system. In addition, after the electoral fraud of 2017, the Spanish Embassy intervened in favor of the recognition of José Orlando Hernández.

The Spanish government is therefore conducting itself with shameful hypocrisy. On the one hand, it expresses its concern for the alleged violations of human rights in Venezuela; in addition, it welcomes, making improper use of the legal status of refugee, an oligarchy that conspires, from Madrid, to overthrow Maduro; and on top of that, it gives shelter in the Embassy in Caracas to the fugitive Leopoldo López. On the other hand, however, he remains silent and even actively cooperates with a government lacking any democratic legitimacy, ignoring the terrible situation in Honduras and showing that, in this case, he is not concerned about human rights, free elections or poverty.

The comparison between the cases of Honduras and Venezuela is not arbitrary: the deployment of 300 Marines in Honduras precisely when the usurper government of Juan Orlando Hernandez staggers under popular pressure shows that these events are inserted into a geopolitical context of at least continental dimensions:

Historically, the U.S. has intervened 64 times in 20 Latin American states. These interventions range from the military appropriation of large territorial extensions (Mexico, 1846) to promoting coups d’état (Chile, 1973), through the occupation of countries for decades (Cuba 1906, Nicaragua, 1912). 36 of these 64 interventions have been openly military.

With specific reference to Honduras, the U.S. invaded the country in 1924. In 1981 it occupied it again militarily to train and support the Nicaraguan contra. In 1984 it reinforces its presence in support of the contra. Currently, the United States has 13 military bases on Honduran territory.

The coup against Zelaya and his subsequent ineligibility to take part in the elections again was the first link in a chain of destabilizing manoeuvres (from the twisting of the constitutional architecture to the farce trials) whose objective was, and still is, to put an end to the Bolivarian governments of Uruguay, Brazil, Ecuador, Argentina and Venezuela. The massive protests of the Honduran people, as well as the mobilizations in Argentina, Brazil or Ecuador, constitute unexpected focal points of resistance that the attempts to restore the old order under Washington’s leadership in Latin America did not count on. These popular mobilizations justify that we harbor the hope that it will be impossible to completely reverse the historical cycle opened at the end of the 1990s for all of Latin America.

On the other hand, Washington’s attention to the situation in Honduras cannot be explained without taking into account the existence in this country of thirteen military bases that can undoubtedly form part of the plan of harassment against Venezuela, reaffirmed still during the presidency of Barack Obama and intensified under the government of Donald Trump. In addition to the geostrategic interests of the United States, there are also the economic interests of Canada, which controls the country’s extractive industries and manages them in a way that is especially harmful to indigenous communities.

Honduras is a case in which the usual procedures for its control and submission systematically fail: coups d’état, fraudulent elections, selective assassinations, … That is why the US has decided to send troops to actively collaborate in the repression of any form of resistance that attempts to change the current situation.

The Anti-Imperialist Internationalist Front, therefore, once again condemns US interference in Latin America in general and in Honduras in particular and also repudiates the submissive complicity and hypocritical silence of the governments of Spain and Europe.

Finally, the Anti-Imperialist Internationalist Front expresses its support for the social mobilizations of the Honduran people and hopes that at last, ten years later, an end will be put to the situation of usurpation that began with the coup against Zelaya and has persisted ever since.