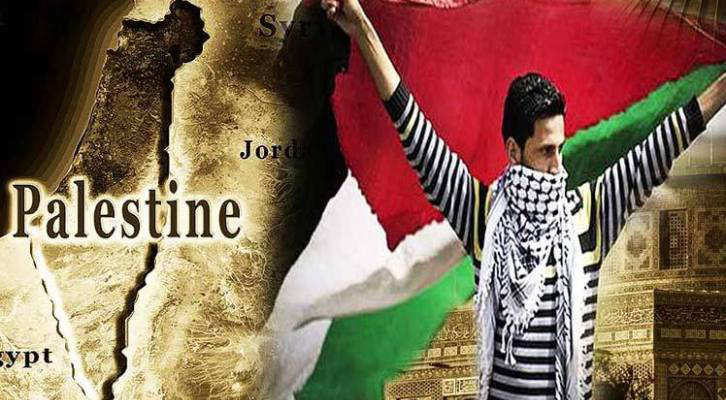 Criminalizing solidarity is part of the war against the Palestinian cause

FAI’s Position on Attacks on Solidarity with the Palestinian Cause

On the 10th of June the 6th court of the National High Court followed up a complaint against three internationalist comrades in 2014 and 2015 who collected economic contributions (less than 9,000 €) for the reconstruction of schools and hospitals in Gaza bombed by the Israeli Zionist state. The complaint was filed by “The Lawfare Project Spain”, a lobby of Zionist lawyers that already has a branch in Spain. Founded and chaired by Brooke Goldstein, a Canadian-American lawyer and documentary filmmaker, who claims that this organization is a legal weapon to protect Israel (thus covering up the terrorism of the Zionist state, as if the occupying state that has violated more UN resolutions and that systematically violates international law needed some kind of protection).

In January, eight Boycott, Divestment and Sanctions (BDS) activists were charged with asking the peace festival Rototom in Benicasim (Valencia) to cancel pro-Israeli singer Matisyahua’s performance. A singer who had raised funds for the Israeli army through the Friends of the Israeli Army association (FIDF) and who had publicly justified the attack on the Freedom Flotilla in 2010, in which 9 people were killed and 38 injured. The complaint against BDS activists was filed by lawyer Abel Isaac de Bedoya Piquer, president of the Legal Committee against Anti-Semitism and Discrimination, known for defending members of the ultra-Bastion group and the neo-Nazi TNT group.

All these denunciations against those who defend the Palestinian cause in our state have to be analyzed together. It seems obvious that the Zionist Entity has initiated a new strategy of war against the Palestinians. It has stopped defending itself from the proven accusations of human rights violations, crimes against humanity and being an occupying state that practises the most cruel apartheid known, and has gone on the offensive in two specific fields: the communicational and the judicial.

In the first, he had been designing careful campaigns to promote and sell images, as well as to cover up the massacres and ethnic cleansing that he carries out against the Palestinians every day. In both fields Zionism has important allies all over the world. Israel could not sustain itself or survive as a country if it were not for the military and economic aid of American Imperialism and its European allies. But it also deploys itself internationally as a mafia organization whose networks are inserted into the civil societies and institutions of Western countries.

The Zionist Entity is a military enclave in the Middle East whose survival is explained by foreign aid, and by the support and subordination of countries under the imperialist orbit as is the case of the kingdom of Spain.

The Spanish state and its government, in the same way as in its relationship with Latin America, does not have an autonomous foreign policy that is independent of US interests and its allies in the area. The successive governments of both the PSOE and the PP have favoured the installation and actions of Zionist lobbies throughout the territory, acting against organised civil society, which has traditionally shown great solidarity with the Palestinian cause, with the right of the Palestinians to return to their land, and has repeatedly demonstrated against Israeli occupation and apartheid.

These lobbies have worked for years in the cultural and media industries, with the support of financial power networks and various allies in state structures. At the moment they are strong enough to develop their actions in the judicial field, as well as having a fertile ground for gag rule and reform of the penal code. Hence, the persecution and criminalisation of solidarity with Palestine is intensifying at this time coinciding with a major imperialist offensive throughout the Middle East.

For years, Zionism has tried to identify the Palestinian cause with terrorism without succeeding. Despite multiple forms of image washing, the Spanish population has remained supportive of the Palestinian cause as it is a cause that unites all left-wing groups, from the most innocuous NGOs to the most committed activists. Examples of this internationalist solidarity are the Flotilla’s campaign for freedom to break the siege of Gaza that is launched every year, the more than 80 municipalities and councils that since the bombing of Gaza in 2014 have joined the campaign of Apartheid Free Spaces (ELAI) led by the Solidarity Network against the Occupation of Palestine (RESCOP), or the Global Campaign for the Return to Palestine launched by the FAI in Spain.

The denunciations against activists for Palestine and the acceptance of them by the Spanish judicial system, aim to confuse public opinion and identify the Palestinian cause with terrorism.

But there is another objective that cannot go unnoticed. With the denunciations and trials of internationalist activists, the scarce resources of solidarity, both economic and human, are channelled towards the defence of the accused comrades and cease to be destined to the Palestinian cause. The criminalization and repression of solidarity follows a perverse logic of diverting attention from the main cause of internationalism. Speeches, communiqués, economic aid, acts of support and solidarity focus on defending “our own” and blur the main victims: the Palestinians.

On the other hand, the criminalisation and persecution of solidarity means that the state and its institutions ally themselves with the neo-colonial Israeli state in order to facilitate its action abroad. In this way, it collaborates with Zionists who persecute those who denounce their crimes and practice international solidarity with the Palestinians.

The economic aid that the different organizations of solidarity with the Palestinian cause have collected over the years has made it visible that the economic blockade imposed on Gaza is a weapon of mass destruction. It is a form of war with which the aim is to subdue the population by subjecting them to the maximum cruelty possible, exterminate them through hunger, without medicines and without the resources to survive. The blockades are habitual instruments of the imperialist war, used against Cuba, Venezuela, Iran, etc. To accuse and prosecute the solidarity that tries to break the blockade of Gaza, seeks to remove from activism those committed and active people, who have pending cases and stop participating in solidarity actions, and in turn, hides the economic war against Palestine.

In the case of the boycott, which emerged as an initiative of Palestinian civil society, its effects making visible the occupation and violation of human rights by the Zionist Entity are becoming increasingly important around the world. Boycott, divestment and sanctions until the end of the occupation of Palestine are actions that can be carried out by both institutions and organizations as well as individual citizens. That is why it has become a priority target to be attacked by Zionist organizations. There are many city councils, some of a certain entity such as that of Gijón or Cadiz, which have passed resolutions in favour of BDS. The Zionist lobbies together with the Israeli embassy in Spain have launched all kinds of resources to reverse these municipal resolutions and to persecute the people who, making use of their freedom and their solidarity conscience, practice boycotting.

We would like to express our support for all the comrades who exercise internationalism and solidarity with the Palestinian cause. The FAI as an anti-imperialist and internationalist organisation will continue to defend the cause of the Palestinian people, their right to return and the legitimacy of all forms of resistance to the occupation as laid down in the United Nations Charter.

We adhere to the Platform of Support for Nines and Palestine and demand “the withdrawal of all accusations against these comrades, as well as the cessation of all repression against the activity of solidarity with the Palestinian people. And for the Spanish State to stop protecting legal initiatives promoted in the last instance by the State of Israel, which seeks to achieve not only impunity in the massacres perpetrated against the Palestinian people, but also to silence the voices and solidarity activities that denounce them”.

Zionism is a racist ideology, born in the 19th century, which justifies crimes against Palestinians through the religious principle of the superiority of the Jewish people chosen by God and their occupation of the “promised land”. Under this fundamentalist ideology, the Israeli Zionist State pursues and criminalizes international solidarity through lobbies and organizations that act in the Spanish State. The FAI denounces that organizations such as The Lawfare Project Spain, the Association for Action and Communication on the Middle East (ACOM) and the Legal Committee against Anti-Semitism and Discrimination promote hatred and racism against Palestinians, cover up the actions of the neo-colonial state and use false accusations of anti-Semitism to criminalize solidarity and the defense of the rights of Palestinians.

We demand that the case against BDS activists be dismissed and that all organizations and individuals defending peace and the right of peoples to a dignified and secure life be guaranteed that they will not be persecuted for the practice of an inalienable human right that is solidarity with peoples.