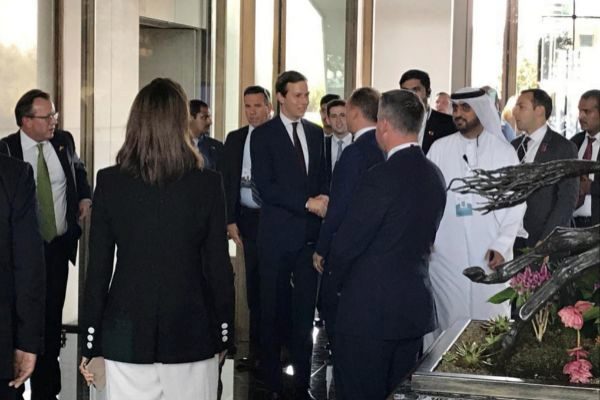 Communiqué of the FAI against the Bahrain summit. New imperialist aggression against the Palestinian Cause.

On June 25th and 26th, 2019, an economic forum sponsored by the United States was held in Bahrain with the aim of addressing a “peace solution” for Palestine. It would be a meeting of potential investors in the Middle East who would create the conditions for an agreement, grandly described by the Trump Administration as “The Agreement of the Century”.

The mass media – large economic corporations – have presented the meeting as an opportunity for the Palestinians and the countries hosting the hundreds of thousands of refugees who have been suffering from Israel’s ethnic cleansing since 1948. They have shown the United States and the Zionist Entity as promoters of an honest and disinterested peace initiative, willing to resolve the conflict. As has happened on other occasions, the media are at the service of imperialist propaganda and present us with a supposed willingness on the part of the aggressors and a lack of collaboration on the part of the victims.

At the head of this farce, the U.S. government has placed Jared Kushner, son-in-law of Donald Trump and his main advisor for the region, who is subordinated to the Zionist lobby. High representatives of the Zionist Entity as well as of the lackey governments of the Arab world also participate: the satrapy of Saudi Arabia, the host Bahrain, Egypt, Jordan, United Arab Emirates, Oman and Morocco. On the contrary, they refuse to take part Palestine itself and other key regional actors: Syria, Iran, Lebanon, Iraq, Turkey, etc.

The media have described this summit as a failure due to the lack of participation of the main actors and the rejection of the “recipient” countries. However, the real objective of the Forum went beyond the staging of a market of supposed investors for the area. Behind this meeting is what has become the strategy of a declining empire, the United States and its double need, both to recover economic spaces and to defend its main military enclave in the area, Israel.

In the Middle East, the main obstacle to US-led imperialism continues to be the resistance of the Palestinian people. Defeated in Syria, without succeeding in stabilising Iraq, with Lebanon governed by Hezbollah and Iran resisting the economic war, the Palestinians once again appear to be a central problem for the reorganisation of the area according to US economic interests. The attempt to involve the countries affected by the conflict is also intended to isolate Iran and increase the siege and siege of this key country for the control of the area’s resources.

The Bahrain Forum has been as farcical as the pretense of a peace agreement without Palestinians and their legitimate rights. As Mustafa Barghouthi, secretary general of the Movement for the Palestinian National Initiative, put it: “No one has the right to speak on behalf of Palestine.

Likewise, the Israeli Zionist entity cannot be considered a valid counterpart to a peace agreement: Israel functions as a historic occupying force in Palestine and continuously and systematically violates all United Nations resolutions. Thus, as long as it is not obliged to respect international law, Israel invalidates itself as a peace partner.

Its American partner also makes clear its position of absolute disrespect for international law, as evidenced – for example – by Trump’s declaration of Jerusalem as Israeli capital and the subsequent transfer of its embassy in December 2017.

On the other hand, the funds pledged in this Bahrain forum – a hypothetical 50 billion US dollars, which would supposedly be shared equally between investments in the region (mainly Lebanon, Jordan and Egypt) and economic aid to the Palestinian Territories – reflect how the Kushner proposal is reduced to an attempt at a trade agreement, so in keeping with the mentality of the Trump Administration.

In exchange for this money, neighboring states would be blackmailed into reducing their support for the Palestinian cause (especially by Lebanon) and into forcing the displaced Palestinian refugee population to take citizenship of these countries. With a stroke of the pen, the Palestinians would thus lose their legitimate historical claim to the Right of Return; as well as their right to land in the face of the occupation of Israeli settler settlements, their historical and social identity, and so on. In short, a delirious renunciation which Zionism seeks to demand of the Palestinian people and their national liberation movement.

In addition, however, this proposal is being launched in a current situation in which US imperialism is showing signs of having entered a marked decline, both economically and in its military hegemony in the Middle East.

While they promise this flow of millions in exchange for dismantling any Palestinian claim, the US-Israeli duo has stopped transferring payments to UNRWA to cover the basic sustenance of the refugee population. They intend to make this economic injection for Palestine credible while at the same time maintaining the criminal land, sea and air blockade of Gaza, which constitutes a terrible collective punishment that has suffocated the Gazan population since 2007: more than 2 million people besieged.

The Economic Forum must be framed within the US strategy against Palestinian resistance, but also against Iran. US imperialism (together with Israel and Saudi Arabia) is today increasing its preparations for a direct military aggression against Iran. The attacks on the oil tankers near the Ormuz Strait and the drone incursions into Iranian sovereign airspace, as well as the deactivation of nuclear agreements and rearmament, are clear signs of an escalation that does not seem to presage a peaceful resolution in the area. The US has intensified its “sanctions” – in fact, an economic war – against Iran which, together with Syria and the Hezbollah militia, the so-called “Axis of Resistance”, is the almost unique fundamental support of the Palestinian movement of resistance and national liberation against the Zionist occupation.

In the meantime, the government of Pedro Sánchez keeps a silence complicit with Zionism, once again placing the Spanish state in a role of ally and subordinate to the imperialist chain. In spite of the fact that Spain has tried on numerous occasions to situate itself in a pretended role of mediation, what is certain and verifiable is that the different governments have propitiated that in the political class and all its institutions Zionist positions are settled, with their racist and xenophobic ideology, which foments the persecution of any movement of internationalist solidarity with Palestine. The recent criminalization of the three sisters in Madrid accused of financing terrorism for their collection of funds destined to the Palestinian cause is a fine example.

Furthermore, with its membership of NATO – the world’s leading agent of imperialist aggression – and its close relationship with the Israeli Mossad, Spain has become a collaborator in the genocide against the Palestinian people.

In short, from the Internationalist Anti-imperialist Front (FAI) we express our strongest and categorical condemnation of the Zionist plans against Palestine. In our exercise of internationalism, we support the resistance of the Palestinian people against the manoeuvres of imperialism to impose a “peace agreement of the century” which in reality only seeks the total expulsion of the Palestinians from their land.

Therefore, as anti-imperialists, we denounce the Bahrain conference and the Kushner plan, and demand that the legitimate right of the Palestinian people to return to their land be guaranteed.

For the Right of Return!

From the river to the sea, Palestine will win!

Long live the struggle of the Palestinian people!

[…] Communiqué of the FAI against the Bahrain summit. New imperialist aggression against the Palestinia… […]