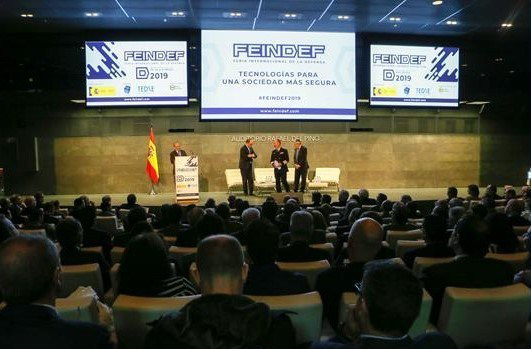 The FAI joins the denunciation made by the collective Desarma Madrid of the International Defence Fair in Madrid, which expresses the deepest rejection of its organization with the following reasons:

And, consequently, it is proposed:

The Anti-Imperialist Internationalist Front expresses its conformity and its absolute support to the act of denunciation proposed by the Madrid Disarmament Collective. However, we consider that the abstract denunciation of this type of events related to the arms trade requires some nuances, which place the drama they conceal in its proper dimension.

Spain produces arms not for the defence of its sovereignty, which it has in fact renounced, nor does it sell them to other countries to defend its own, but rather arms production is at least a mere business, if not a way of supporting countries and mercenary and paramilitary organisations that sow chaos and massacre the civilian population, such as in Colombia, Libya, Saudi Arabia in Yemen or ISIS in Syria and Iraq or in the numerous armed conflicts in Africa.

Under these conditions, yes, Spain is the 7th largest arms exporter in the world and, as a consequence, these weapons appear in the hands of the bloodiest and most abject armies on the planet.

We therefore believe that the complaint cannot be limited to those who manufacture or sell weapons, but must also be directed at those who use them or cause them to be used. It is imperialism, the eagerness to plunder the so-called developed nations over the others, which is ultimately responsible for the great majority of the existing armed conflicts.

The United States, as the imperialist hegemonic power, is responsible for unleashing all aggressions against peoples and nations that have not wanted to follow its dictates for more than 50 years. And NATO is the instrument with which the United States has equipped itself to subdue other peoples of Europe and prevent them from having autonomy in their international relations, making these states accomplices to their aggressions and crimes against other peoples and nations.

The USA has been responsible for unleashing the arms race; already in USSR times, the aggressive attitude of the whole West and the plans of nuclear attacks for the simultaneous destruction of dozens of cities of the USSR forced it to develop its own nuclear arsenal.

Aggressors and aggressors cannot be placed on the same plane and those who promote war cannot be measured with the same yardstick as those who defend themselves.

Manifesting neutrality and demanding disarmament in general is, objectively, reinforcing aggressions; especially when the aggressor is much more powerful than the attacked.

Adequate armament is necessary when history places peoples in the need to defend themselves against aggressions. But manufacturing weapons is very expensive and complex; it is only within the reach of a few industrial powers; therefore, countries without the necessary technology have no choice but to turn to the international market to obtain their means of defence.

The arms fairs that take place in the West serve first of all for the obscene and sinister enrichment with the arms trade and with it, to feed the military-industrial complex, one of the most powerful oligarchic groups that dominate the capitalist world.

If there is no compassion for the victims, these groups, from the governments and agencies of their countries, promote and feed continuous wars all over the world with the triple motive of getting rich by selling arms, preventing the development of countries that do not renounce their sovereignty and are obstinate in maintaining reciprocal relations with others and as a lesson for those who hesitate to do so.

A more especially flagrant case is that of the war in Yemen, held in the shadow by the US, the UK, Israel and other NATO countries, such as Spain, which has found in this conflict a juicy niche market for its ammunition and explosives (including some prohibited by international law), which sells Saudi Arabia as one of its most important suppliers and with which civilians and children are massacred daily in the face of the indifference of the West, which relates it as if it were an inevitable fatality.

In the same way, Spain has proved to be a supplier of weapons and “defence” systems to Colombia and other countries of the American subcontinent, where its armed forces play a leading role in the strategy of harassment and war against Venezuela and the countries that have demonstrated their autonomy with respect to the US, while massacring their own populations.

The objectively perverse thing is not that there is an arms trade, which is inescapable for those countries that do not have the technology or resources to manufacture them and need to defend themselves against foreign aggressions; it is, on the contrary, the shameless display of weapons in a public market, as if any banal consumer product were involved and without consideration in the hands of those who are going to end up. Therefore, what is to be condemned is this type of arms fair, aimed at a clientele that knows beforehand that it is going to do everything necessary to guarantee imperialist interests as proxy forces, sparing the central powers the dirty work on the ground.

Consequently, the IAF, within its campaign “70 years of war. NATO not bases outside” (https://frenteantiimperialista.org/campanas/70-anos-de-guerra-otan-no-bases-fuera/), wishes to show that only a determined attitude of denouncing imperialism, of defending our own sovereignty and of putting pressure on our rulers to abandon and close NATO and disassociate themselves from the USA will be able to help, in the long term, to resolve the tragic panorama of war, destruction and death that plagues the planet.