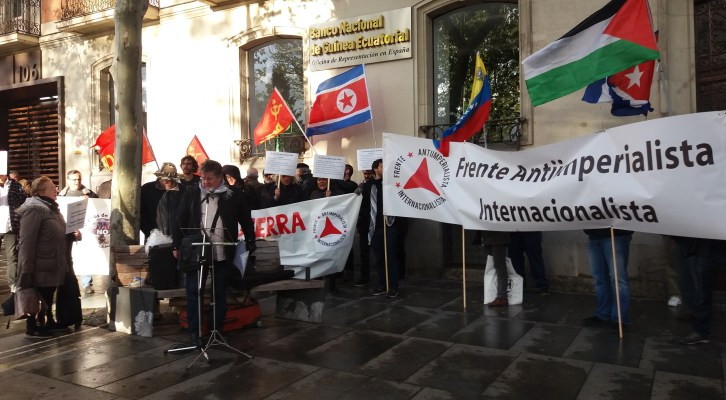 A Rally Against the 70th Anniversary of NATO In Madrid

Within the campaign “70 years of war. NATO no, bases out”, the Internationalist Anti-imperialist Front had organized a rally in front of the US embassy.

After an intense but brief hailstorm, some 50 people accompanied the representation of “the NATO clown”, with a satirical interpretation of the role in security and stability that politicians and the mass media try to convince us NATO plays and of the complicity of the Spanish state and the cession of military bases to the US.

Slogans were chanted against NATO and its interventions, such as “NATO no, bases out”, “Military expenses for schools and hospitals” or “NATO provokes, Venezuela is not to be played with”, some songs of anti-imperialist resistance were interpreted and this communiqué was read, and the participants were reminded of the existence of the campaign and to be attentive to further actions to be called.

70 years of war No to NATO bases out!
Campaigns English