The FAI held an event in support of the Bolivarian Revolution

On the same day that the Constitutional President of the Bolivarian Republic of Venezuela took office, the Internationalist Anti-imperialist Front held a public act of internationalist solidarity in the Casa de Vacas of the Madrid Retiro to celebrate the event and point out the growing imperialist threats looming over the Venezuelan homeland.

60 years of revolution: The Cuban Revolution, moral strength and socialism

“The Cuban Revolution was at the same time a revolution for sovereignty and for socialism. In the words of the beloved Cuban philosopher Fernando Martínez Heredia, it was an “anti-capitalist revolution of national liberation”. It was not a copy of the previous revolutions although they undoubtedly influenced it, especially the Russian revolution. Cuba took a path of its own. But socialism was a necessity without which that national liberation could not have taken place. Something that Americans have never come to understand: that socialism and the Cuban revolution form an indissoluble unity.”

Ángeles Diez held a conference in the name of FAI to commemorate the 60th anniversary of the Cuban revolution. The conference dealth with not only with the history of the Revolution, its values and pillars, but also its influence in the world by reviewing concepts such as internationalism, imperialism or capitalism in a simple and very analytical way.

The Murcia Committee of the FAI focused on support for Venzuela 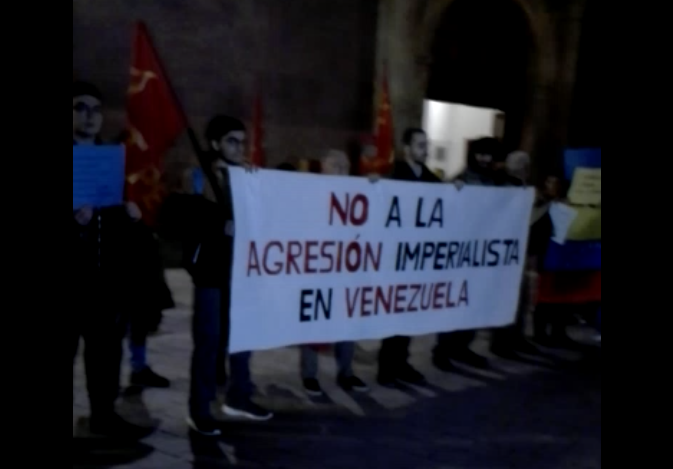 Convened by the FAI of Murcia, on Saturday 26 January a rally was held in the Plaza de Santo Domingo, which was attended by about 100 people.

On January 28, an act of combative commitment against imperialism and to strengthen internationalist solidarity among brother peoples was presented in Valencia.

This is an unavoidable call for all anti-fascist and anti-imperialist people together with the representation of countries that are resisting the continuous aggressions of imperialism by keeping the flag of dignity high.

The Internationalist Anti-imperialist Front (IAF) and the Club of Friends of UNESCO of Madrid (CAUM) convened a public event to discuss the massacres in the Great Lakes of Africa as a result of inter-ethnic struggles spurred on by the interests of large multinationals, eager to take over the mineral resources of the area.

Valencia against interference in Venezuela

Report of the Commune on the act of solidarity with Venezuela held in Valencia with the participation of FAI Valencia.