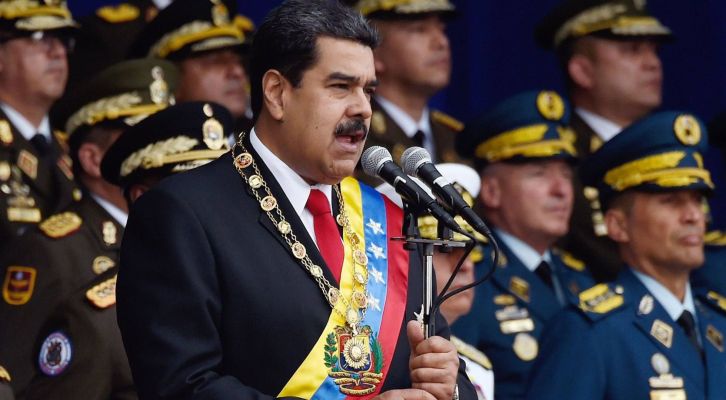 The President of the Government of the Kingdom of Spain, Pedro Sánchez, who is not elected by the people but by the political parties through pacts and compromises, has proclaimed himself a European spokesman and has dared to give an ultimatum to the legitimate President of the Bolivarian Republic of Venezuela, Nicolás Maduro Moros.

He has dared to say that President Nicolás Maduro has 8 days to call presidential elections or the government of Spain will recognize the self-proclaimed President Juan Guaidó. This declaration by Pedro Sánchez is a colonial and imperial act that violates International Law, the Charter of the United Nations, its Security Council, the OAS Charter and the Venezuelan Constitution itself; and places us in the most absolute international illegality.

In the same way that happened in the case of Iraq, the government of Spain is at the forefront of a declaration of war. You do not need to have your picture taken in the Azores as Aznar did with George Bush and Tony Blair; the slight indication from Germany and the mandate from the European Union is enough to lick the boots of the coup leader, Donald Trump.

Once again we see the lack of sovereignty of our country, its political, military and economic subordination to imperialist interests. The position of Spain leading the Western European bloc in its aggression against Venezuela is, in addition to being illegal, an irresponsibility that can have incalculable consequences, causing irreparable damage to the Venezuelan people and to the entire region.

President Sánchez’s declaration of war follows the protocol of the imperial coalition led by the United States: to create -through the media that distort and misinform- the consensus that justifies the armed intervention in Venezuela. In the same way that happened with “weapons of mass destruction” -which never existed in Iraq, but were the lie repeated over and over again to justify a war and an occupation that has cost hundreds of thousands of victims, especially among the most vulnerable civilian population, women and children- the lie that there are no free elections in Venezuela or that President Nicolás Maduro has no legitimacy can serve to unleash an armed aggression that has been preparing for some time. The United States, its European partners, Israel and the Lima cartel lie when they say that Venezuela is in chaos or that it has no international support.

It is worth remembering some data from the presidential elections of May 20, 2018, where the current president Nicolás Maduro Moros was elected:

Sixteen political parties presented themselves with six candidates; three parties did not. Nicolás Maduro Moros was elected with 67.86% of the votes, a higher percentage than the usual ones in that region of the world. 150 people accompanied the electoral process with 14 electoral commissions from 8 countries and 2 technical electoral missions. Eighteen audits were carried out and representatives of opposition candidate Henri Falcón participated in them. No one contested these results.

The cover-up of these facts constitutes an act of war propaganda devised by the public and private media of the empire and its allies, supported by a large part of the intellectuals and the political class of the imperial regime.

The U.S. strategy has been and is to subdue the Venezuelan government by subjecting its people to the cruel economic war, sabotage, blockade, harassment by the self-proclaimed Grupo de Lima, tensions and provocations to generate an international conflict like that of the Exxon Mobile ship in Guyana waters, or obstacles to the return of Venezuelans from abroad… they aim to generate an image of Venezuela outside the law, when in reality it is the opposite.

They are desperate: the coup strategy did not achieve a joint OAS declaration recognizing the illegitimate Guaidó, nor has it managed to get the extraordinary Security Council, convened at the request of the former head of the CIA, Michael Pompeo, now U.S. Secretary of State, to support foreign interference in Venezuela.

What Pedro Sanchez does is support a coup d’état, just as his predecessor Aznar did with the coup that businessman Carmona gave to the Bolivarian government of Hugo Chavez in 2002. The government of Pedro Sanchez follows U.S. guidelines and aligns itself, as its predecessors did, on the side of part of the Venezuelan opposition. A coup opposition led by the United States. The same one that reorganizes itself in the Spanish territory investing its money in real estate businesses in the richest zones of Madrid. The same one that meets with Felipe González and publicly asks for help for an invasion of its own country.

The position of the Spanish government is an irresponsible act of submissive government, aimed at tensioning the entire region and adding to the policies of looting and pillage. Technically, the Sanchez government has issued a declaration of war at the request of its European and U.S. masters. Europe thus tries to legitimize the “right to interfere” in the internal affairs of other countries, faithful to its colonial style.

From the Internationalist Anti-imperialist Front we denounce that Pedro Sánchez does not have any right, at least not any right granted by the constitution or by international laws, to issue an ultimatum to a sovereign nation.

We denounce that the government of the Spanish state usurps and violates the rights of Latin American peoples.

We denounce that the cultural and historical links of the peoples cannot be colonial, nor used as currency to make political gains.

We maintain that like Trump, who needs the conflict with Venezuela to win the next presidential elections, Pedro Sánchez uses the case of Venezuela in the electoral game in Spain.

We denounce that the increase in military budgets in our country and its warmongering and interfering positions respond to the demands of the United States and NATO.

We denounce that Pedro Sanchez is placed with this new aggression to Venezuela in the wake of the number one of the genocidal rulers of our country, Jose Maria Aznar.

As Anti-imperialist and Internationalist Front, we reaffirm our commitment to solidarity with the people and the legitimate government of Venezuela, the Bolivarian government of Nicolás Maduro.

Not in our name!

THEY WILL NOT PASS!

it is insane that world leaders act in solidarity to maintain the practice of having power over people. The Bolivarian principle of giving the power to the people is threatening to the capitalist quest to amass power (i.e. wealth)…