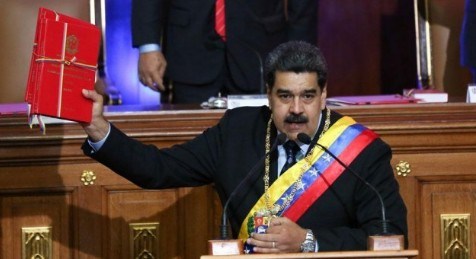 Announcement by the FAI in Support of Venezuelan Democracy

Today, January 10, President-elect Nicolás Maduro takes office. The Bolivarian homeland has been enduring constant attacks and interference since the moment it decided to become independent from the imperialist yoke and regain its sovereignty in 1999.

For almost 20 years the Venezuelan people and their government have resisted all kinds of aggressions, both from the Venezuelan elites who have lost their capacity to continue exploiting and plundering the popular classes, and from the United States and its European allies who have seen a fundamental source of natural, political and geostrategic resources being lost.

In spite of the constant propaganda campaigns against Venezuela and its repeated attempts at destabilization, parliamentary coups, encouragement of violence, support for assassinations, etc., the Venezuelan elites and their European partners, especially Spaniards, have not managed to bend the popular will.

In 2017 the Venezuelan opposition opened a new phase of destabilization, fuelling violence in the streets, sabotage, ignorance of institutions, economic war and foreign intervention. In addition, the National Assembly, with an opposition majority, had been in contempt since 2016 and blocked all kinds of decisions to resolve the economic crisis. The Venezuelan opposition has used all kinds of weapons, some legal but above all illegal, to achieve its goal of reversing the Bolivarian revolution.

After that National Constituent Assembly, presidential elections were called on May 20, 2018. Some opposition candidates ran while others followed U.S. directives not to run. Nicolás Maduro won the elections with more than 6 million votes, which constitutes 67.84% of the votes cast, with a higher turnout than in the U.S., Argentine, Colombian or Chilean presidential elections.

Denying legality and institutionality is a well-known strategy to overthrow governments that do not subordinate themselves to imperial interests. The blockade, the economic sanctions, the propaganda campaigns against the Venezuelan government are part of the imperialist war against all peoples fighting for their sovereignty. The attacks on the Venezuelan government are not isolated facts, Nicaragua, Bolivia, Cuba, continue to be on the imperialist agenda, they are the current expression of a historical process of conquests, annexations, occupations, and all kinds of wars with which the United States has sown the continent.

We demand that the government of the Spanish state respect the sovereign will of the Venezuelan people, that it does not contribute to regional destabilization, that political leaders stop intervening in Venezuelan national politics, and that Spanish paraperiodists stop encouraging violence, ignorance of Venezuelan institutions and supporting the coup aspirations of the opposition and fascist movements in the region.

Long live the Venezuelan people and its president Nicolás Maduro.

Chávez lives, the fight goes on!