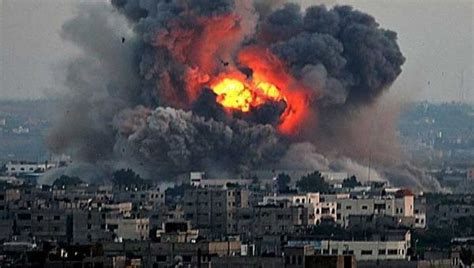 AGAINST THE NEW ZIONIST AGGRESSION IN GAZA

Once again, the Zionist entity of Israel has discharged all its fury and violence against the besieged Palestinian people in the Gaza Strip and without escape. The Zionist entity has caused dozens of martyrs, thousands of wounded and the destruction of hundreds of homes and media headquarters, as is the case of Aqsa TV.

The Internationalist Anti-imperialist Front expresses its strongest condemnation of this arrogant and criminal attack, which violates all the norms of international law and humanitarian law, which are so invoked in other scenarios to destabilize governments that do not bend to imperialist pressure.

International law grants a population struggling against the occupier the right to use all means at its disposal to free itself from the occupation and to seek and receive support for this struggle. The Palestinian people have every right and legitimacy to resist the permanent Zionist aggression by all means, including the use of force. The absolute disproportion between the military means employed by the Zionists, backed by the USA and its European vassals and the rudimentary means of self-defence available to them in the Gaza Strip, completely invalidate any attitude of neutrality or equidistance.

It is time for international solidarity to materialize with decisive action against Israel’s Zionist entity, demanding that governments suspend diplomatic relations, supply of arms and any possible collaboration.

We demand the international intervention of the UN and its Security Council to put an end to the war and the blockade imposed against the population of Gaza.

The IAF publicly denounces the complicit attitude of the government of the Kingdom of Spain, which continues to compromise with the Zionist criminal policy and to strengthen its commercial and “security” ties with them, while it has abandoned the Palestinian people, who have been dispossessed of their territories and their rights and locked up in the largest open-air prison in the world. We also denounce the equidistant or directly pro-Zionist attitude of the majority of parliamentary parties and representatives of other state institutions.