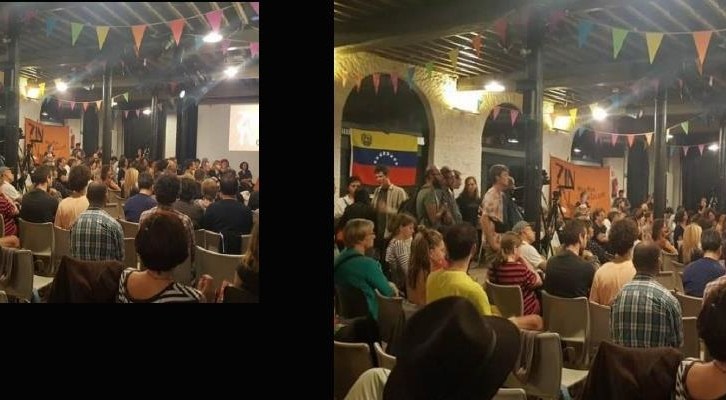 We, representatives of 36 organizations with a history of internationalist struggles from 17 European countries, have constituted today, October 13, 2018, gathered in Brussels, Belgium, the European Network of Solidarity with the Bolivarian Revolution (RED Europea de Solidaridad con la Revolución Bolivariana).

Venezuela has been a victim of the systematic violation of its sovereignty, through an economic and financial blockade imposed by an executive order issued in 2015 by the White House and reinforced by the current U.S. administration. As a result of this, the people of Venezuela are suffering a shortage of medicines and food that affects the social gains they have made in previous years. Seeing the failed attempts to defeat the Bolivarian Revolution by unconventional means, they have escalated the forms of war and intervention to the point of a frustrating assassination against the legitimate President Nicolas Maduro Moros.

With this plan also failing, Washington and its satellites are creating the conditions at the international level to justify military intervention.

The Venezuelan people in the face of this situation have shown unprecedented resistance as a result of their own moral and ethical reserves, accumulated since the historic triumph of Commander Hugo Chávez in 1998, which has served as an example for the world.

Venezuela, due to its geopolitical and strategic role, is an obstacle for the control plans of the region of the transnational elites that need to appropriate their natural resources.

In view of the continuous aggression and the real and repeated threat of military intervention against the Bolivarian Republic of Venezuela, we, members of the European Network of Solidarity with the Revolution, commit ourselves to the unconditional defense of the Venezuelan people.

The European NETWORK proposes to develop an agenda of struggle that will allow us to break the siege of lies and defamations about the Venezuelan reality. As well as: to demand from the European institutions the cessation of the interfering aggressions, sanctions policies and support to sectors with clear terrorist purposes.

We, the members of the European Network of Solidarity with the Bolivarian Revolution, assume ourselves as defenders of the sovereignty and self-determination of the Venezuelan people and its revolutionary process.

European Network of Solidarity with the Bolivarian Revolutionm
English Statements