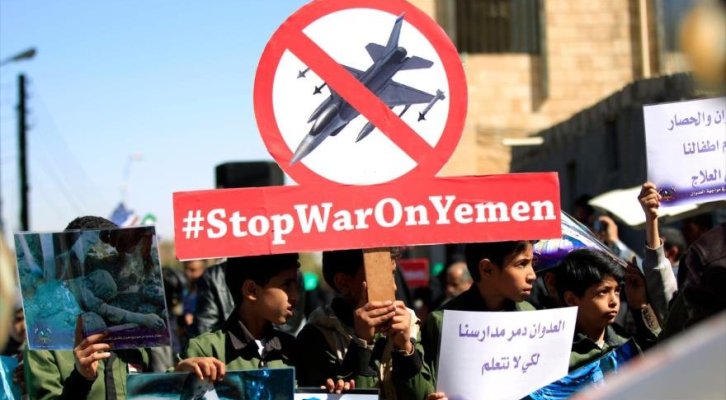 YEMEN: A WAR, A GENOCIDE

Recently, the Government announced the cancellation of the sale of 400 precision pumps to Saudi Arabia.

The press warns that Saudi Arabia can cancel the contract with Navantia for the manufacture of 5 corvettes.

The works council and the workers of Navantia, claiming that thousands of jobs could be lost, ask the Government to rectify and guarantee the contract of the corvettes.

The mayor of Cadiz affirms that; ” the peace of the world cannot fall on the backs of the workers “.

The Government, through the mouth of its Minister of Foreign Affairs Josep Borrell, announces that the order is not cancelled, because they are high precision bombs.

“History will condemn us for selling arms to a country, Saudi Arabia, which is committing the greatest atrocities in Yemen. A bridge country between the Near East and Africa, it already has more than 17,062 civilian victims and 29 million people suffering famine, cholera, diphtheria and other diseases”. (Luis Gonzáles Segura)

Saudi Arabia and the coalition of countries that support it and the US attack the Yemeni rebel popular movement. Their attacks have impoverished Yemen: thousands of deaths, a famine of millions of people, and the destruction of basic infrastructure for life. These are the consequences of the bombings. Saudi Arabia is an abominable dictatorship, although European and US rulers justify their interference in Yemen as helping to conquer democracy.

US imperialism and NATO use Saudi Arabia as the armed arm of the war against Yemen and Spain, a NATO member, as the queue for supplies of war material. The oligarchy makes a profit from it through its businesses, the royal house commissioner, Juan de Borbón… And the Spanish people are harmed. The deficit of the AVE la Meca-Medina will cost Spanish taxpayers one million dollars.

What is also hidden in the war against the Yemeni people?

The STRATEGIC IMPORTANCE of YEMEN, for the USA and its NATO allies, SAUDI ARABIA and its coalition.

The strait of Bab el-Mandeb (Red Sea – Gulf of Arden) is one of the busiest maritime routes in the world, and because of its location, close to the rich oil wells of the Middle East, it is of strategic importance. Saudi Arabia exports most of its crude oil through it.

The United States and Arabia destabilize and create chaos in Yemen in order to control this strategic zone.

They are truly responsible.

Let us not be complicit in the imperialist strategy. We have to combat their ideological influence among the workers.

For all this, from the Internationalist Anti-imperialist Front of Murcia we denounce:

Capital is very skillful in posing a false dilemma, defending jobs against internationalist “idealisms”. But the reality is different. It is capital that is responsible for unemployment and precariousness, in addition to provoking and developing the imperialist wars from which it is enriched, appropriating the resources of the countries it destroys: Iraq, Somalia, Libya, Afghanistan, Syria, Yemen .

It is what they defend with all their media complicit in these tragedies.

LET’S NOT FALL INTO HIS TRAP!

BY a PRODUCTION MODEL at the service of society and which does not OBLIGATE TO BE COMPLICATED with its KILLINGS.

NOT THE SALE OF ARMS TO SAUDI ARABIA!

OTAN NO, BASES OUT!

FOR THE SOVEREIGNTY OF THE PEOPLES, NOT IMPERIALISM AND ITS WARS!