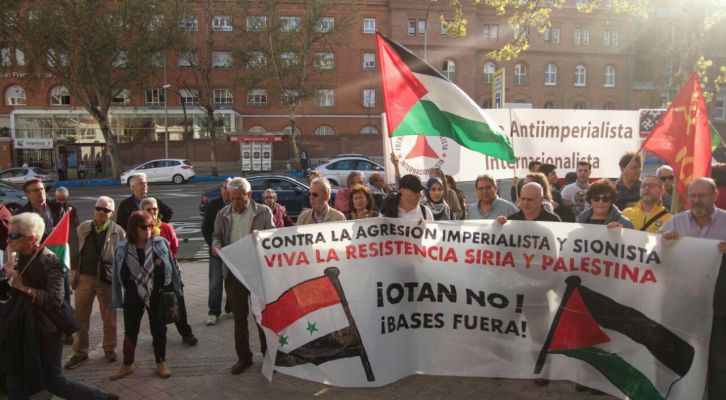 Summoned by the Internationalist Anti-imperialist Front, some two hundred people gathered in front of the embassy of the Zionist entity of Israel, after a negotiation with the National Police who claimed that the concentration had not been communicated. The march initially planned from this embassy to that of the United States had to be limited to the concentration before that of Israel, leaving the organisers committed to a future mobilisation to highlight the link between Zionist crimes and the aggression by the USA, the UK and France against Syria, in the Euro-Atlantic strategy of imposition and control of the Middle East.

At the ceremony, slogans were chanted and the following communiqué was read out

Statement: For the defense of the Palestinian people’s right of return and against the massacre perpetrated by the Zionist Entity of Israel.

On 30 March, the day of the Palestinian Land, thousands of Palestinians went to the Gaza border to demand compliance with United Nations resolution 194/1948, which stipulates the right of Palestinian refugees to return to their lands and properties in their homeland usurped by Israel. The Israeli occupying army, just as it did in 1976, shot unarmed women, children and youth. Since the 30th, more than 40 Palestinians have been killed and more than 4000 injured.

These recent events are not really new. Colonialism, first with England and France as hegemonic powers that divided the area after the fall of the Ottoman Empire, and American imperialism later, after World War II, have not stopped intervening in the Middle East according to their political, economic, military and geostrategic interests.

The self-proclamation of the Jewish State of Israel consented to the expulsion of more than 800,000 Palestinians from their lands, the assassination and massacres perpetrated by Zionist terrorist groups that would later make up the current occupying Entity. Since 1948 until today, ethnic cleansing has been carried out in Palestine, which is taking more and more victims every day. For years, the Zionist entity of Israel has acted as a colonial power, has been the gendarme of the whole area and practices with the Palestinian people an apartheid comparable to that which took place in South Africa: It tries, by all means, to expel the Palestinian population from Jerusalem and practices an ethnic cleansing unprecedented in the entire history of humanity, in clear violation of all treaties and with the hypocritical connivance of the Atlantic hegemonic bloc and its satellites. Moreover, it is a threat to the entire region as the sole possessor of nuclear weapons.

Every year the Zionist State arrests between 500 and 700 children accused of throwing stones, and today there are more than 6,500 prisoners in Zionist prisons, 54 of them women, 8 girls and 350 boys; in the last 5 decades more than 800,000 Palestinians have passed through Zionist prisons. These figures are just a brief testimony of the Zionist pretension to make the Palestinian people disappear.

In recent months, the virulence and desperation with which the US and its allies are acting – its direct intervention in bombing Syria, and the declaration of Jerusalem as the capital of the Zionist Entity – show a breakdown of the global power of the US and its European allies that is being found in this area with countries that question imperial unipolarity.

Thus, Donal Trump with the decision to move the U.S. embassy to Jerusalem has made a declaration of open war to the Palestinian people and with it to all Arab peoples in the area. Once again it has violated the mandate of the United Nations, the multiple resolutions issued for more than six decades, the right of the Palestinian people to return and international law. It has actually made a declaration of war on all humanity.

This new U.S. declaration of war could not have been made without the connivance of allied countries, especially Europe, as well as Arab monarchies. There are no significant differences between American and Zionist interests for hegemony on the planet.

The Spanish state is one of the strongest allies of Zionism. For years it has tried to give the appearance of a mediator in the conflict, but the reality is that all governments to date have favoured the insertion of Zionism and its discourse in our institutions. Zionism, which, let us not forget, is a racist and xenophobic ideology, the first sister of fascism. In addition, the Spanish State has a key role in the new phase in which the World War has entered. U.S. military bases -Rota, Morón- played and continue to play a fundamental role in these wars: they are logistical bases, armaments, fuels, bombers’ flights, etc. Spain belongs to NATO and has expeditionary armies in more than 30 countries of the world.

Moreover, through its public and also private media, it is the spearhead of the informative and ideological war in the entire Spanish-speaking world. For three weeks we have been listening to the “paraperiodistas” of the media the same legitimate discourse of the Zionist Entity, accusing the Palestinians of violence and presenting the murders of Palestinians as acts of defense.

The Spanish state, its institutions and its political class are dependent and subordinate to the interest of the hegemonic power: the USA. The Spanish government and the institutions of the whole state have an intense relationship with the Zionist State and MOSAD, from the Ministry of Defence and the security forces – armament, training, etc. – and from the Ministry of Foreign Affairs there is a policy of persecution and harassment of the solidarity movements with the Palestinian people, especially the BDS.

From the IAF we consider that the bombings of Syria and the assassinations of Palestinians these days are part of the same imperialist war that has entered a new phase and has its nerve centre in the Middle East. The imperialist objective at the moment is to give continuity to the war in Syria and to liquidate definitively the Palestinian resistance.

From the IAF we defend that any human being who loves peace, cannot fail to raise his voice against imperialism, in solidarity with the Palestinian people and their right to fight for the recovery of their land, their right to return and the capital of their state in Jerusalem.

We denounce and condemn the attacks of the empire and its allies on the Syrian people and its legitimate government. We cannot remain silent in the face of these criminal acts whose significance for the region and for the world we cannot yet imagine.

Long live the struggle of the Palestinian people!