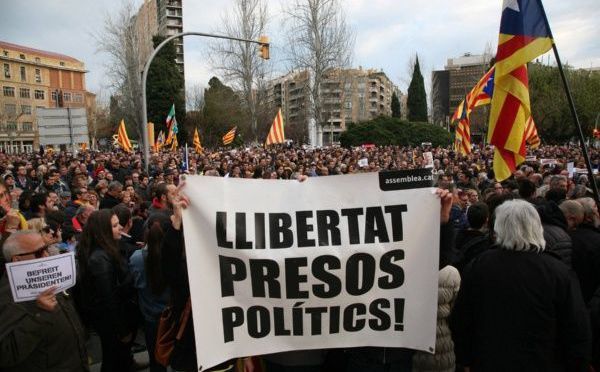 FAI communiqué on the situation in Catalonia

The latest arrests of Catalan politicians, the violence with which the Catalan people are repressed in the streets, the arbitrariness and partiality with which the courts act and the impunity of the government, once again highlight the authoritarian nature of the Spanish state.

Those who at one time or another had hoped that the flood of economic modernisation would lead to the democratisation of the State and its institutions could definitively put an end to this illusion. What is happening in Catalonia is the clearest expression of the limits of a Spanish state that organises itself and acts on the basis of mafia organisation: political elites that divert public resources towards their private ends, the arbitrary application of laws, impunity and the selective use of repression.

The usurpation of the popular will of the Catalans expressed in the ballot boxes and the imprisonment of their legitimate representatives must be understood in the same logic as the criminalisation of young rappers, dissident journalists, artists, pro-independence politicians, social movements and workers’ struggles. This is the result of the historical confluence of the interests of a part of the economic elite and the political-ideological power of Francoism, which has never ceased to be hegemonic in most of the territory of the Spanish State.

This confluence has increased with the economic crisis and has strengthened the authoritarian characteristics of the Spanish State. The current situation reflects a double subordination of the political class, of the State and its institutions, on the one hand, to the Western policies of imperialist expansion and dispossession of the working classes, on the other, to the interests and ideology of the classes inherited from Francoism. Nothing that offers resistance to these two logics can be tolerated.

The post-Franco Spanish state has been configured to serve the interests of the political class and the business world. Companies, the State and the political class function cooperatively. That is why corruption is the main supporter of a State that resembles more a mafia State than a European Rule of Law and that constantly resorts to repression and arbitrary application of the law in order to sustain itself.

A state that is known to go unpunished and essentially supported by the European institutions. Despite the fact that various international reports state that freedom of expression is under attack, that the reform of the penal code and the “gag” law are allowing the Spanish government to subject social network users, journalists, legal professionals and musical artists to constant harassment, these complaints are nothing more than recommendations without effect.

It is no coincidence that it was Germany, which marks the passage of Europe’s economic policy, that led to the arrest of the elected Member of Parliament, Mr Puigdemont. The political and ideological links between the two states are obvious. The Germany that supports the Spanish government by affirming its democratic character and its respect for the Constitution is the same Germany that forced the reform of Article 135 of the Spanish Constitution in order to subordinate social policies to the payment of the debt. The Spanish State has become a model to follow for Europe in its repressive policies against immigration (Foreigners Law, assassinations in Tarajal, CIES, hot returns…), in its contribution to imperialist expansion (increase of the military budget, strengthening of NATO…), in its belligerent and interfering policy against sovereign governments such as the Bolivarian government of Venezuela.

The mass media, both public and private, act as propaganda organs of this authoritarian and repressive government. They divert attention from the corruption and impunity of the political class, from the growing inequality and precariousness and direct it towards the criminalisation of Catalonia and its representatives.

Despite the propaganda campaigns of the Spanish government and the mass media, it is difficult to hide the existence of political prisoners, the selective persecution of freedom of expression (which openly admits the exaltation of the Franco regime, perpetuating the impunity of its crimes) and the repression of social movements. Faced with the events taking place inside and outside Catalonia, talking about the Rule of Law and Democracy is a mere slogan to nullify all forms of resistance.

Once again we affirm that only the broadest unity against the Spanish authoritarian State can lead to a true Rule of Law.

From the Anti-imperialist and Internationalist Front, placing ourselves in respect for the popular will democratically expressed by the Catalan people, we denounce and condemn:

We also express the firm will of the IAF to fight for the freedom of the imprisoned Catalan independence fighters and for all those who are in legal proceedings or in prison for defending their independence ideas and opposing a repressive and authoritarian State. Finally, we support the popular mobilisations that have arisen in Catalonia in defence of their rights and freedoms.