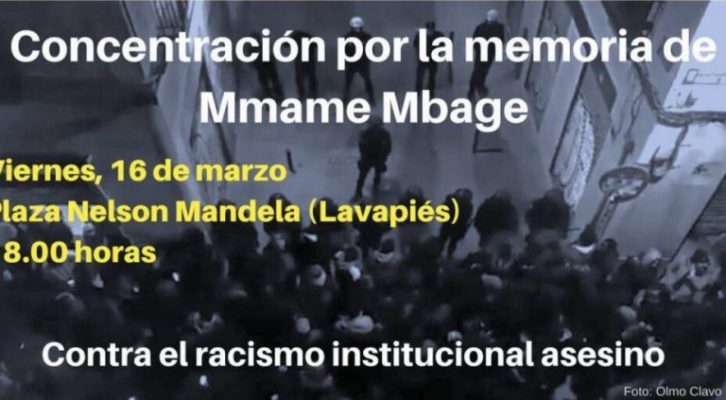 To the lords of the government and its false-media

Yes, gentlemen: a slave died, while you in the media argue whether he was running persecuted yesterday, or if he was entering his house, and you talk like that because you are cynical slave traders. And it is a shame to hear how they blame the inhabitants and the poor of the neighbourhood, the dispossessed, the nets, the squatters, all those who resist being the pasture of the vultures of capitalism and its slavery.

Yesterday they killed a slave who spent 14 years waiting for his papers, surviving in the horror of constant persecution. Day and night. No Rest. Years running since he left his country of origin, expelled by a savage exploitation that makes life there unbearable for people, so that the business of European capital flourishes.

Day after day they run through the streets with their blankets and their faces terrified because the police not only beat them but also take away their goods paid for on credit, their poor work, and if they take them away that means more hunger.

They lie when they say that they are repressed because the traders complain, that selling in the street is a competition and is illegal. They lie and if that is what the merchants say, then open a space for these people to survive with dignity, with papers, without the daily terror. These merchants must be taught humanity, if they think that a person who is earning his lentils in one of the most frightening jobs in this city must be persecuted.

Yes, sirs, no human being is illegal. And that illegality that you force them to suffer is the only thing illegal.

What kind of humanity and society is this that persecutes those who are already condemned because they have no papers to run and hide and suffer all kinds of humiliations?

Yes, sirs: the heart bursts. A man’s heart has a limit and the limit is an unacceptable degree of suffering.

I don’t care if he died while running persecuted, because this persecuted man always ran and ran because that’s the condemnation to illegality, that’s the maximum exploitation, that’s the result of a systemic cruelty that gives the owners of property and rights, the power to treat as slaves the one who doesn’t even have the right to work and must be sold to the highest bidder without any protection: that’s capitalist barbarity. And that is slave labor condemned to suffer it.

And now the helicopters fly over the square, looking for culprits when the culprits are there and visible in the domes of the company, the banks and government institutions.

Yes, gentlemen, you have killed a black man once again, while the Spanish people suffer all sorts of social and political cuts and while it is absolutely and permanently stolen.

Yes, gentlemen, you have killed a brother of this slavery that has no color, because it is everyone’s slavery, ours.

If you gentlemen don’t lie, don’t use the deaths any more to continue increasing the salary of yourselves and your shock forces (700 euros of increase to the police this week) while the old people are condemned to misery, unemployment and inequality grow… and as we don’t have to go hunting, look for false culprits and confront society against each other when we are all on the same sidewalk of the dispossessed and devastated by this capitalist barbarity.

They will not divide us, this is a long struggle for our rights, they will not confuse us, we are one class and from there we demand justice and dignity, as did the workers who fought against this constant theft and dispossession called the capitalist system.

Yes, they have murdered a slave, but the slaves have said enough, and in the long or short run they will once again obtain their liberation.

No human being is illegal!