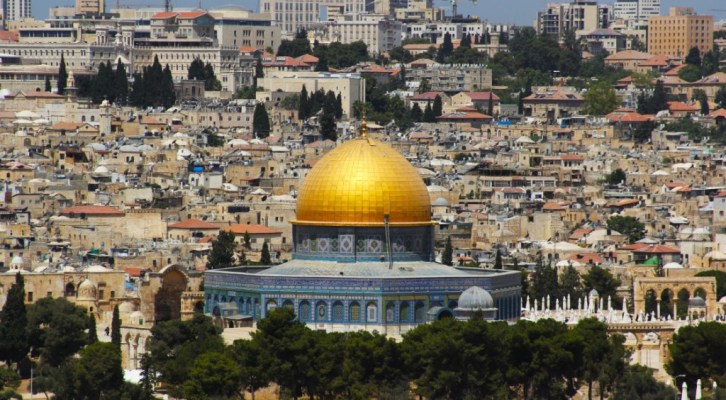 Once again the president of the United States makes a declaration of war on the Palestinian people and with it on all humanity. Once again he violates the mandate of the United Nations, the multiple resolutions issued for more than six decades, the right of the heroic Palestinian people and international law, by designating the city of Jerusalem as the capital of the Zionist entity of Israel and moving the headquarters of the U.S. embassy to that city.

President Trump’s statement is inscribed in the colonialist and imperialist logic of the United States. Since the fall of the countries of the East, all U.S. administrations, both Democrats and Republicans, have increased their military power and have expanded different forms of warfare throughout the planet. The impunity of the United States and the connivance of the allied countries, especially Europe, as well as the Arab monarchies, make possible a new phase of this World War.

The Anti-imperialist Front condemns the decision taken by the US government. We consider that this declaration is a new aggression to the right of the Palestinian people to their beloved land with East Jerusalem as its capital.

For years, the Zionist entity of Israel has acted as a colonial power, has been the gendarme of the whole area and practices with the Palestinian people an apartheid comparable to that which took place in South Africa: It tries, by all means, to expel the Palestinian population from Jerusalem and practices an ethnic cleansing unprecedented in the whole history of humanity, in clear violation of all treaties and with the hypocritical connivance of the Atlantic hegemonic bloc and its satellites. Moreover, it is a threat to the entire region as the sole possessor of nuclear weapons.

Trump’s decision in turn responds to the growing influence of Israel’s Zionist entity in the world. There are no significant differences between American and Zionist interests for hegemony on the planet. From the Anti-imperialist Front we also denounce this Zionist influence in the government of the Spanish State and its different administrations, which was evidenced on November 6, when the mayor of Madrid, Manuela Carmena, gave the golden key of the city to the Israeli president Reuven Rivlin and yet did not give the keys to the Palestinian president Mahmud Abbas.

We repudiate the pusillanimous subordination of the Spanish government in foreign policy and condemn the encouragement given to Zionist aggressiveness.

We are facing a new attack on international law by the United States, which will not only increase tension in the area, but also anticipates an increase in the escalation of war throughout the world. Under international law, East Jerusalem (including the Old City and its sacred sites) is not legally part of Israel; the international community does not recognize the sovereignty of any country anywhere in Jerusalem.

Any human being who loves peace cannot fail to raise his voice against imperialism, in solidarity with the Palestinian people and their right to fight for the recovery of their land, their right to return and the capital of their state in Jerusalem. We cannot remain silent in the face of a new criminal act whose significance for the region and for the world we cannot yet imagine.

From the Anti-imperialist Front we denounce and condemn this new declaration of war by imperialism. Our internationalist duty is on the side of the rights of the Palestinians to recover their land.

The Anti-imperialist Front also manifests that the US decision should be considered a criminal consolation prize to the Zionist entity that sees every day as its strategy to build a Great Middle East led by Israel – shared with Euro-American imperialism and Saudi Arabia – crumbles in the face of the undisputed victory of the Arab Resistance in Iraq, Syria and Yemen. The Palestinian people will resist, as they have done for sixty years, now with the morality of victory, because today more than ever Palestine is the heart of Arab dignity and identity.

Jerusalem will always be the capital of Palestine!